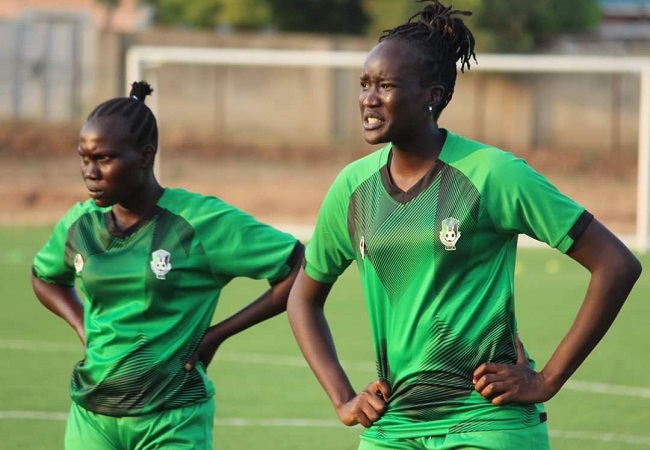 The South Sudan Football Association (SSFA) has blasted a government minister for disrupting a National Women’s League game demanding the removal of his footballer wife.

Reports indicate that Aluel Garang, known as Aluel Messi, was playing for Aweil Women against Juba Super Stars over the weekend, when her husband, the National Minister of Humanitarian Affairs and Disaster Management Peter Mayen Manjongdit, arrived at Aweil Freedom Square to stop the match and have his wife off the pitch.

In a statement released on Monday confirming the disruption, SSFA expressed its disappointment with the move from the government official.

“The minister stormed the football pitch asking the organisers to stop the match and let his wife come out. The minister was not happy the wife left their three-month-old baby at home and joined her teammates for the game.” Said a report in news outlet Hot in Juba.

“He was told to wait. But he was so impatient and had to fire his pistol in the air disrupting the game. The game was later stopped to allow the minister to go home with his wife.” Added the report.

“The Administration of South Sudan Football Association would like to express its disappointment for the impropriety act applied by the National Minister of Humanitarian Affairs and Disaster Management Hon. Peter Mayen Majondit who disrupt the official football match in Aweil Town demanding the removal of his wife called Aluel Garang known as Aluel Messi from the field of play.

Therefore, we condemn such transgression by a popular and responsible personnel serving in a higher position in Government. The Administration of SSFA will continue to stand strong and co-operate with the Government to see our women being given chance to play and exercise their talents freely with confidence. Promotion, development and full participation of women is one the objectives of SSFA.”

An email sent by Nation Sport to SSFA confirmed the incident indeed took place. “Thanks for the inquiry. The match was between Aweil women team vs Juba Super Star Women team in the South Sudan women league.”

“I think condemning that it is stupid isn’t enough. He must be disciplined.” One fan going by the name Akoon LAAL expressed his disgust.