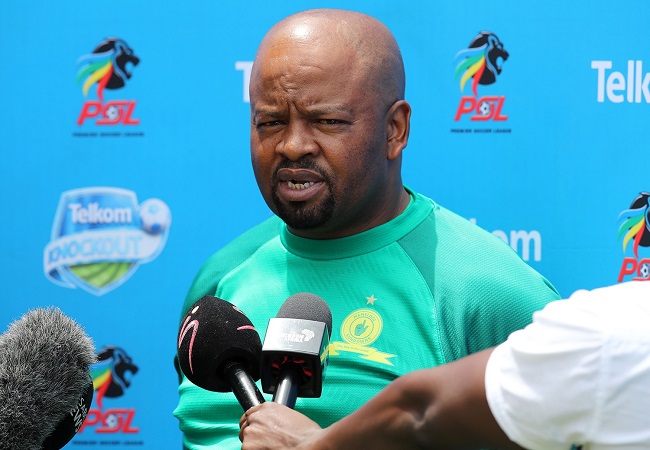 AmaZulu are hosting log leaders Mamelodi Sundowns in a much-anticipated DStv Premiership match in Durban on Wednesday afternoon. And Masandawana coach Manqoba Mngqithi has warned fans of overhyping their clash against AmaZulu FC. Because he feels it may be too much pressure for coach Benni McCarthy.

As Mngqithi respects the progress made by his former club under coach Benni McCarthy, he believes it would be unfair to compare the two sides.

“I don’t think it will be fair for coach Benni McCarthy to even hype that game up to that level, he has done very well. And we are proud of their success. But the truth must be told.” Mngqithi told the media.

“Their success is the incubation stage. We must accept at the certain point they might not pitch at the right level. I’m not saying we will beat them. But we must be able to say they might not make it.

“We must understand that coach Benni has just joined AmaZulu. And in terms of depth, they don’t have the depth that we have. Maybe they might be fortunate that we’ve played more games prior to that clash.”

“But the truth must be told… I want to them to be supported. When President Zungu spoke about top four, I don’t want to lie. I thought it (was) far fetched and I told him, ‘Je must accept it might not happen.’ But what he told me when you put your eyes on something, it may happen. And when I see them now, I’m excited.” Added the Downs coach.