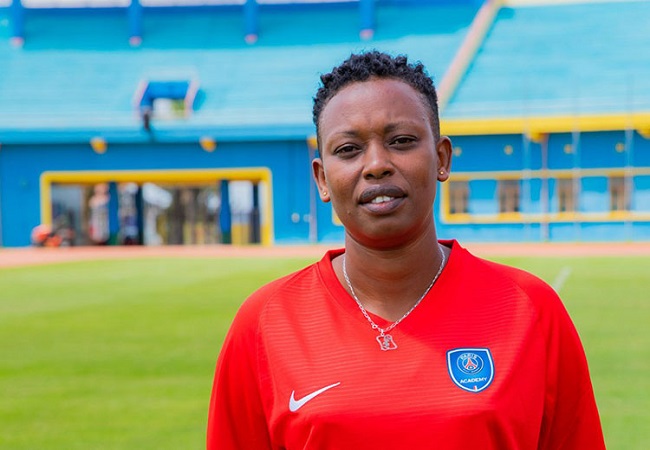 The academy is part of a three-year sponsorship deal that was signed in December 2019 between Rwanda and the French football giants. The partnership will among other things see the French club promote Rwandan brands and the country as a tourism destination of choice.

Nyinawumuntu was part of a workshop that was spearheaded by PSG-Academy Head of Coaching Benjamin Houri was aimed at training candidates on the PSG-Academy methodology.

The candidates were appointed following their performances in both theoretical and practical sessions for the Technical Responsible role as well as coaching roles.

Paris Saint Germain-Academy appointed the staff following a 3-day workshop with all candidates who were pre-selected for various roles in the academy.

Nyinawumuntu became the first Rwandan female professional football coach in 2008 after getting a Level B license certificate from Germany. And she is also the first Rwandan woman to become an international referee.

She played in the first national women’s team in 2009 although the team never played in major competitions. And she became the team’s head coach in January 2014.

She also served as coach of the national women’s senior team in 2014 for two years.

Nyinawumuntu guided the City of Kigali-sponsored side to a record eight consecutive league titles, from 2009 to 2016 when she was relieved of her duties.

The other appointed Staff of the PSG-Academy Rwanda include General Manager Theonas Ndanguza and four coaches who are Hamida Murekatete, Alain Mbabazi, David Rumanzi and Nonde Mohamed.