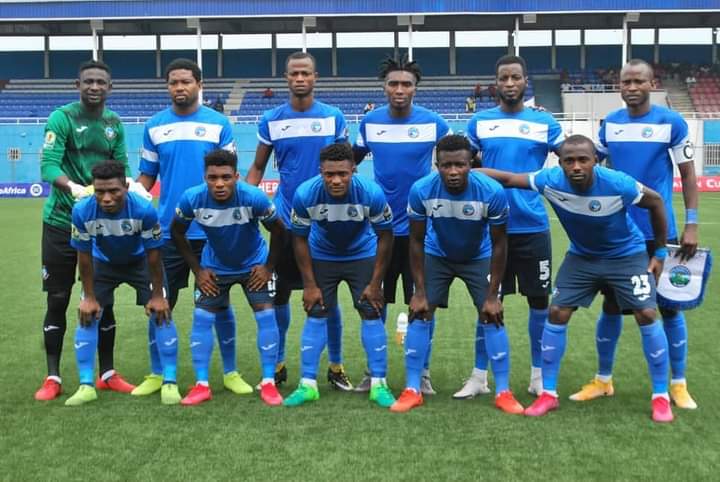 Enyimba’s quest in winning the 2021 CAF Confederation Cup remain on course following their 1-0 victory against Orlando Pirates and qualied for the quarter-final.
An added time goal by Cyril Olisemah in the 95th minute  saw the People’s Elephant finished top of Group A.
Enyimba headed to the game on the back of their 1-0 loss to Al Ahli Benghazi which threw the qualification open for all four teams in the group.

The Nigeria representatives  was without their captain and leading scorer Augustine Oladapo who was suspended.
Fatai Osho made four changes to the side that lost 1-0 in Libya against Al Ahli Benghazi.
Tosin Omoyele started from the bench alongside Omaka.
Their South African opponent played more at the back knowing that a draw can see them through.
However, Olisema’s last gasp goal and ES Setif 1-0 victory over Al Ahly Benghazi made Enyimba’s qualification easier.
Prior to the last Group A matches, Orlando Pirates was topping the group with 9 points followed by Ahly Benghazi had 7, Enyimba had 6 while Setif had 5 points.
However with Enyimba defeating Pirates 1-0, same scoreline Setif had against Ahly Benghazi, Enyimba Qualified as Group leaders followed by Pirates eventhough they have same points however, Enyimba have goal difference of -2 while Pirates have -3.
All Eight Teams That Qualified for the Total CAF Confederation Cup
Group A:
Enyimba
Orlando Pirates
Group B:
JS Kabylie
Coton Sport
Group C:
AC Jaraaf
CS Sfaxien
Group D:
Raja AC
Pyramids