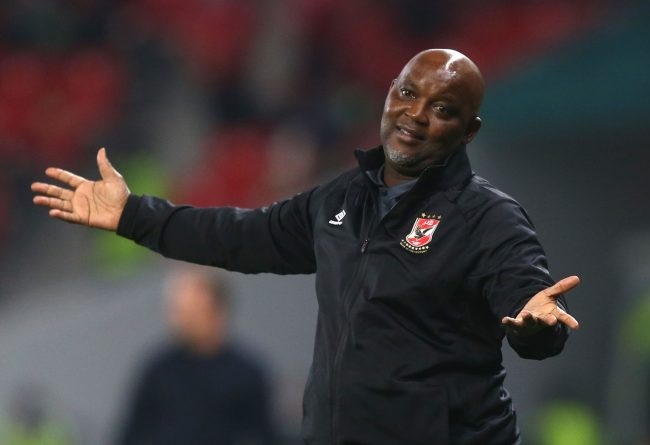 Former South Africa international Teko Modise recalls a conversation he had with Pitso Mosimane where the latter revealed that he wanted to coach South Africa.

Mosimane has recently been approached by the South Africa Football Association (SAFA) to take on the vacant national team coaching job.

After a lot of negotiations and attempts to sign him, SAFA finally gave up after he informed that he wants to remain in Cairo with Al Ahly.

However, according to his former player at Mamelodi Sundowns Teko Modise, Mosimane set a goal for himself to one day coach the Bafana Bafana.

“I remember having a conversation with coach Pitso a long time ago. He said he wants to coach at the World Cup. He’s now coaching in Egypt, and in the Champions League and the biggest tournaments. But [in future] I see that happening.” Modise told Soccerladuma.

“With Bafana Bafana, we know it’s not gonna happen. If he had to come back, it would be the same people that he fought with when he was Bafana coach. I still see Pitso coaching at the World Cup, whether it’s [2026] or whatever.” He added.

Since signing for Al Ahly in October 2020, Mosimane has been quite successful as he won all competitions he took part in [CAF Champions League and Egypt Cup]. He however lost the Club World Cup finishing third.

He now also reached the Champions League knockout stages with the Red Devils, where he will face his former club Mamelodi Sundowns.