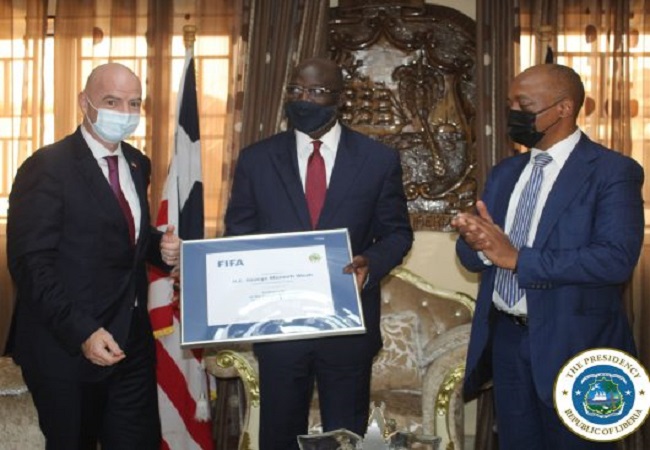 A joint CAF and FIFA delegation travelled to Liberia to hold meetings on Wednesday with the Liberian Football Association and government officials in Monrovia.

The discussions include partnerships with the public and private sectors, increased opportunities for youth through football. And appointment of Liberian President George Weah as the first Ambassador of the Pan-African Inter-School Championship was on the agenda.

CAF President Dr Patrice Motsepe underlined that Liberia had huge potential to provide more opportunities for youth through football. FIFA President Gianni Infantino reinforced this message. He eferenced the iconic George Weah – now President of Liberia – as a great example of the positive impact football can have on a country.

“We hear your concerns and would like to assure you of CAF’s commitment to work with Liberian football and government authorities to improve football infrastructure here.” CAF President Dr Motsepe said during an official meeting with the Minister of Youth and Sports followed.

The delegation, together with the Minister of Youth and Sports, then visited the Samuel K Doe Football Complex. A venue that has been fitted with a new turf pitch through funding from the FIFA Forward programme.

“FIFA believes that every country should have access to the best quality pitches and football facilities. And we will work with CAF to bring about more improvements to Liberia.” FIFA President Gianni Infantino said speaking at the complex.

An audience with Liberian President, His Excellency George Weah, followed. Strengthening African and Liberian football was central to discussions. “We are happy to be in a country so passionate about football. We are here to give you CAF and FIFA’s full support to take football into a new era. And we will work with you to do this.” Declared Gianni Infantino.

Talks also covered the power of football on economies. “Football and economic development go hand in hand. So let’s try through football to invest in job creation.” Said CAF President Dr Motsepe. “It’s also our duty to make sure stadia meet the required standards. And CAF will work with the Liberian authorities to do so.”

The conclusion of the meeting saw the CAF and FIFA Presidents present President Weah – the only African to have won the FIFA World Player of the Year award – with a certificate announcing him as the first Ambassador of the Pan-African Inter-School Football Championship.

“President Weah is an icon of football and now a respected statesman. FIFA and CAF are delighted to have his support. His stellar football career is an inspiration to young Africans. And we welcome him on board this initiative, supported by the African Union, which will see football competitions at national level in schools throughout Africa. Football offers us a unique opportunity to connect with young people and empower them through this programme.” Said Gianni Infantino.

The joint delegation then visited the construction site at the headquarters of the LFA to discuss the developments that have taken place in expanding women’s football in the country. They then after attended a women’s youth football match at Antoinette Tubman Stadium.

“We must be proud of and thankful to the LFA President for his excellent work. Football has a bright future here. The girl who is going to be the African winner of The Best FIFA Women’s Player Award could be here today!” CAF President Dr Motsepe said in a short address.