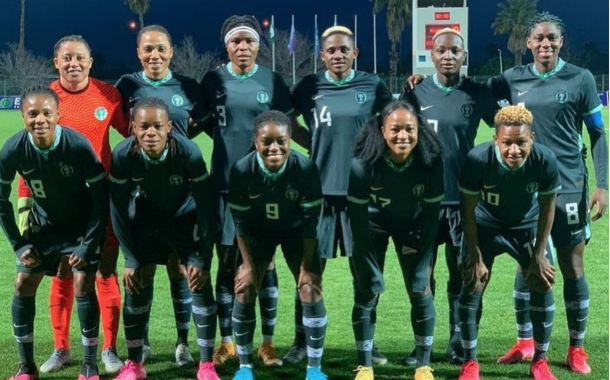 Nigeria Super Falcons have been invited to this year’s Women Nation Tournament set to kick off in June.

The nine-time African champions Nigeria will be one of four participating teams in the tournament that will be presented by AT$T 5G.

The games will be played at the BBVA Stadium in Houston and at the brand-new, $240million Q2 Stadium in Austin built by the newest club in the Major League Soccer, Austin FC.

Both cities are in the State of Texas and the clash between the Super Falcons and the US Women A team will be the first-ever football match at the state-of-the-art Q2.

This year’ tournament which will be the third edition is expected to begin June 10-16 after it was was last held in 2018.

Super Falcons will how take on Jamaica June 10 in Houston before squaring up against Portugal three days later.

Reacting to the Invitational tourney, Super Falcons head coach Randy Waldrum said it will be a great prospect to continue building the team.

“The Summer Series is an interesting event and the teams featuring are of very high quality.

“It is a great prospect for us as we continue to build ahead of the qualifying games for next year’s Women Africa Cup of Nations.”

Nigeria and the USA have clashed five times previously, with four coming at the FIFA Women’s World Cup, and one in the Women’s Olympic Football Tournament.

Both teams last met at the FIFA Women’s World Cup in Canada in 2015, with the Americans winning 1-0.

The USA Women team  is the only outof the four teams in the Summer Series that will compete in the 2021 Tokyo Olympics.