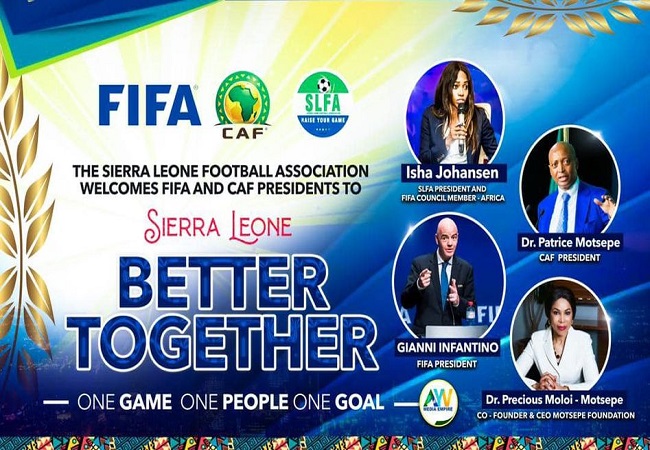 Infantino and Motsepe have called on His Excellency President Dr Julius Maada Bio and promised to improve on the country’s football infrastructure to be able to host the African Cup of Nations.

Sierra Leone’s Minister of Sport, Ibrahim Nyelenkeh, welcomed the delegation from the football world governing bodies, saying that it was history in the making that the country was hosting the sitting presidents of FIFA and CAF for the first time.

“I am not surprised. You must have heard about government’s assiduous strides and relentless efforts at developing and supporting football from the grassroots to the national level.” He noted. He added that the present government had supported sport, particularly football, more than all others in the history of Sierra Leone.

While introducing the visitors, the President of Sierra Leone Football Association, SLFA, Isha Johansen, said that their visit was as timely and historic as it was meaningful to the country. She thanked them for choosing Sierra Leone as one of their three Africa nation tours, the others being Côte d’Ivoire and Liberia.

FIFA’s President Infantino told the gathering that it was an honour and a pleasure to be in Sierra Leone. Saying that they were very committed to helping and supporting Africa shine in the world.

“FIFA and CAF stand for due process, for integrity, for democracy and to make sure that we can once again put aside all negativities that have tarnished the image of football in the country in the last few years. Let us move to promote a positive and united approach. Because we need unity in this country.” He urged.

CAF’s President Motsepe first thanked President Bio for his honesty, integrity and brotherly exchange of ideas. He then called on all to work together and with him in the best interest of football and a beautiful country.

He confessed that the President represented a new breed of leadership not just for Sierra Leone but for Africa. He added that the country had also produced exceptional football players. And he expressed hope that it would continue to produce great players. He pledged CAF and FIFA’s commitment to supporting Sierra Leone with the requisite infrastructure to host the African Cup of Nations in the not-too-distant future.

In a brief statement, President Bio welcomed the Presidents of FIFA and CAF to his beautiful country. He noted that football remained a fashion that the people of his country loved and cherished.

He advised that the people should not be deprived of the game that every Sierra Leonean loved. President Bio further called on the leadership of the two world football governing bodies to invest in the infrastructure of the game in the country.

“On behalf of the government and people of Sierra Leone, I want to thank you and would like you to come again. Thank you for coming. And you are welcome to Sierra Leone.” He concluded.