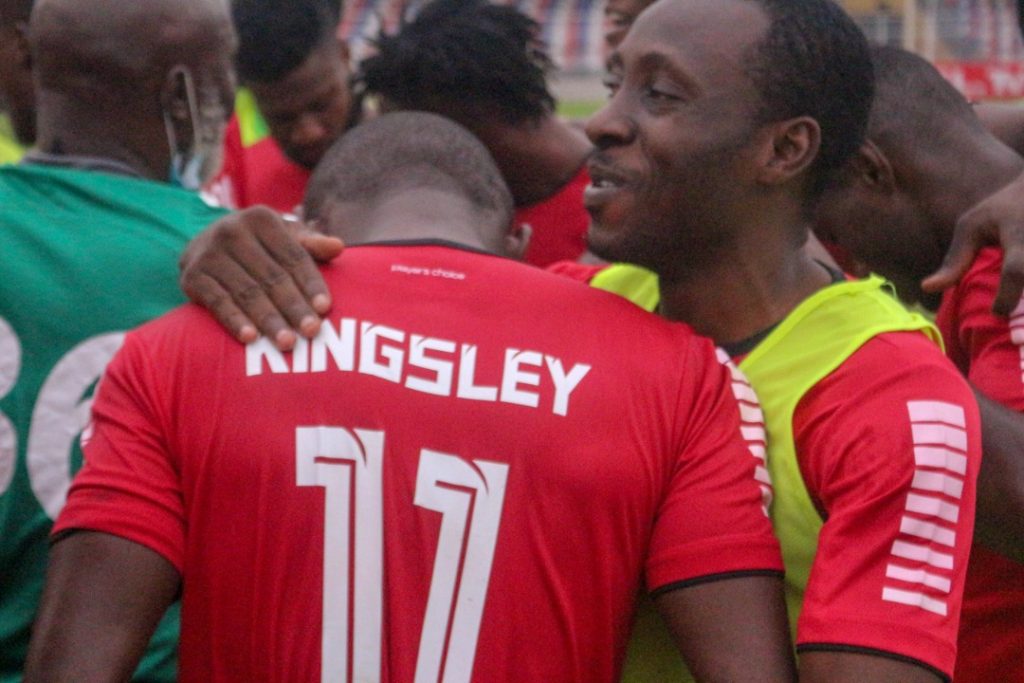 LHostilities resumed in for the second round of the 2020/2021 Nigeria Professonal Football League(NPFL) with lots of intriguing games played on Matchday 20.
All the 20 clubs were involved in action as the race for who will become the next champion of the NPFL entered top gear.
The second round was heralded with 28 goals in all the games played across various stadia in the country.
Only the game between MFM FC against FC IfeanyiUbah at the Nnamdi Azikiwe Stadium ended with the Nnewi club walked over for failing to show up for the game.
The centre referee and the match assessor agreed that a three points and three goals be awarded to MFM FC.

Kano Pillars’ 1-1 draw against Warri Wolves at the Ozoro Stadium, was the only draw recorded.
Heartland FC 1-0 win against Relegation threatened Adamawa United was the only away win of Matchday 20.
Kwara United restarted the second stanza with a 2-1 loss to Nasarawa United in Lafia.
Both teams failed to score in the first half and just three minutes into the second half, Anas Yusuf put Nasarawa United in front.
Silas Nwankwo went on to double the lead in the 69th minute.
Wasiu Alalade scored a conciliatory goal in the 90th minute but was not enough to save his side from defeat.
At the Cathedral , Enugu Rangers piled more pressure on Fatai Osho as they claimed an emphatic 2-0 win against Enyimba FC in the much anticipated Oriental derby.
The Flying Antelopes scored two goals from the spot to claim vragfng right in a game that saw Enyimba head coach made a complete change to the squad that lost to Rivers United.
Christian Nnaji scored the opening goal in the  57th minute from the spot before Elijah Ani made it 2-0 in the 90th minute also from the spot.
Akwa United continued their push for a continental ticket defeating Sunshine Stars 2-1 at the Godswill Akpabio Stadium, Uyo.
Charles Atshimene broke the deadlock for the hosts in the 21st minute.
Sadeeq Yusuf leveled for Gbenga Ogunbote side in the 35th minute.
But it was a 72nd minute goal from Seth Mayi that denied the visitors a share of the points.
Rivers United new boy Sunday Adetunji was in the score sheet again as he helped his side to claim a 2-0 win against Dakkada FC.
Two goals in the first half in the 20 minutes and 32nd minute by Adetunji and Paul Acquach respectively, was all Stanley Eguma lds needed to begin the second round on a winning note.
Mark Daniel’s 86th minute spot kick rescued Warri Wolves from a home loss to Kano Pillars.
Sai Ma Su Gida scored first through Auwalu Malam Ali in the 58th minute but failed to hold on till the end.
It was rain of goals as Katsina thrashed visiting Wikki Tourist 5-1.
Joseph Atule 16th minute opener, set the tone for many more to come as Rasheed Ahmed doubled the lead in the 35 minutes.
Samuel Nnoshiri extended the lead to 3-0 four minutes later before the break.
Stephen Gopey reduced the deficit to 3-1 in the 48th minute.
Samuel Kalu then scored in the 62nd minute to bring the scoreline to 4-1 before Ahmed put an icing to the cake in what was his brace for the fldsu in the 74th minute.
Akwa United now top the table and they followed by Kano Pillars while Kwar United slipped to third place. 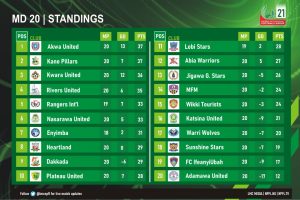