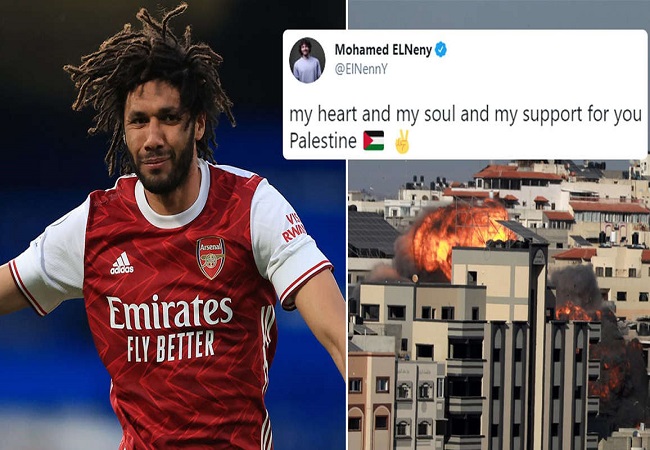 As Israeli settlers continue to violently bomb the Gaza strip with hundreds of innocent Palestinians continuing to lose their lives and homes.

African and Arab footballers who used their platform to raise awareness and showed their support, the likes of Mohamed Salah, Ahmed Elmohamady, Mahmoud Trezeguet, Sadio Mane, Amad Diallo, Riyad Mahrez and more have all shown their support.

“My heart my soul, my support for you Palestine.” Arsenal midfielder Mohamed Elneny wrote on his Twitter account.The fans’ reception of the post was generally positive, apart from the Arsenal’s Jewish fan base who labeled what Elneny wrote as “racist”, “discriminatory” and “anti-semitic”.

This includes Board of Deputies of British Jews, Tal Ofer, who contacted Arsenal sponsors Lavazza Group, with the latter agreeing with Ofer and stated the following:

“We’ll immediately reach out to Arsenal to remark we are concerned about the club associated with such a message.

“Content of this post is totally not aligned with our company values.  Lavazza Group is fully committed against racism and antisemitism.” They wrote.

Ofer also contacted Arsenal’s other key sponsor Adidas according to the JC and was disappointed. Because they didn’t respond.Arsenal previously defended their player as one of their spokesperson told the JC: “As with any employees of Arsenal, our players are entitled to express their views on their own platforms. That said, we are speaking to Mo about this so he understands the wider implications of his post.”

“As a club we are committed to confronting and eliminating all forms of discrimination and continue to champion the need for equality and diversity across all areas of life.”