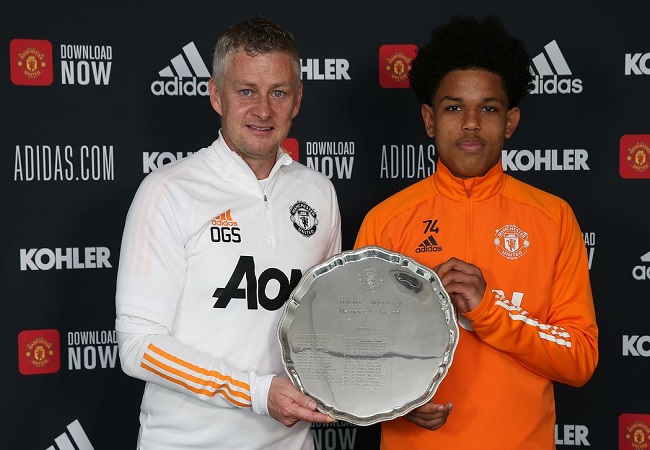 Manchester United has named Nigeria-eligible striker Shola Shoretire as the club’s Young Player of the Year for the 2020-2021 season. It is what the Red Devils released on their official website.

By winning the award, Shoretire has followed in the footsteps of Ryan Giggs, Marcus Rashford, Mason Greenwood and Paul Scholes. They who are previous holders of the prestigious accolade.

He was the top scorer for United in the Premier League 2 with ten goals in twenty-one appearances.

“Especially with the history of the award and the players who have won it before me. I feel very proud to have won it and very thankful to everyone who has helped me to achieve it.”

“Looking at the trophy today and seeing Ryan Giggs has won it twice, Wes Brown, some of the recent ones as well like Mason Greenwood, Marcus Rashford and Angel Gomes, seeing them and seeing I’m on the same path that they were on as well, shows how well United are doing through the Academy and getting people into the first team.” Added the young striker.

Manchester United manager Ole Gunnar Solskjaer confirmed at Friday’s press conference that Shoretire will be involved in their final Premier League game of the season against Wolverhampton Wanderers on Sunday.