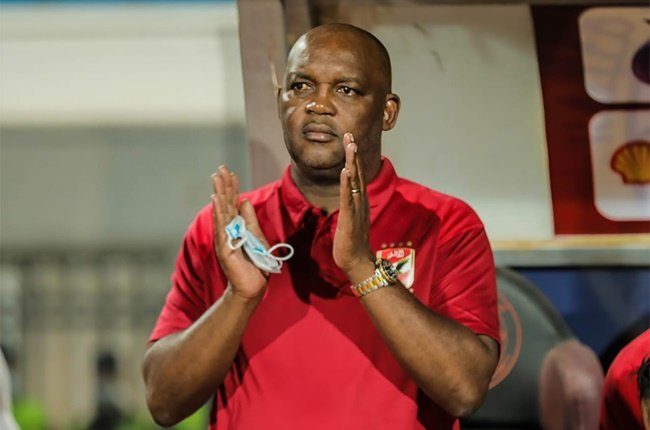 The stakeholders have supported the South African coach after he received insults from a section of Mamelodi Sundowns supporters on Saturday afternoon.

Some of the fans hoisted banners insulting Mosimane outside Lucas Moripe Stadium in South Africa where Al Ahly drew 1-1 with Sundowns.

Al Ahly advanced to the CAF Champions League semi-finals 3-1 on aggregate having won the first leg 2-0.

Football writer Nkareng Matshe tweeted: “The despicable behaviour by a section of Sundowns hooligans who insulted brother Pitso and his mom made it to Thuso Motaung’s programme on @LesediFM. What a PR disaster for @Masandawana who have still not said anything about this.”

“My opinion: someone knew and planned the whole thing. How many other dignitaries, personnel, security and staff members drove past there prior to the bus arrival? They did nothing and wanted to embarrass Coach Pitso, his club and country.”

The publication then tweeted: “We appreciate you @TheRealPitso.”

Earlier, reacting to the incident during a press conference, Mosimane said he was hurt considering that some of the insults were directed at his mother.

“What else should I have done for this team to get the respect? All these people swearing at me, swearing at my mum…but its football I understand. I know the person who did this, just bitter because I left,” he said.