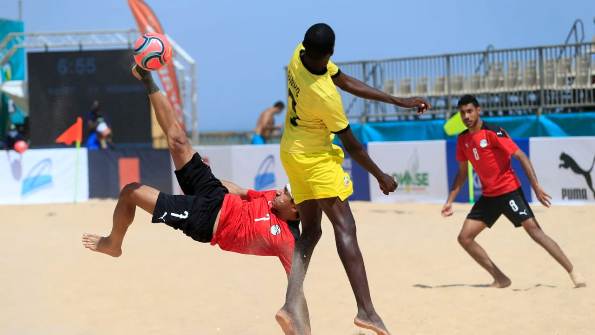 Mozambique on Sunday made a dream debut at the Beach Soccer Africa Cup of Nations (AFCON) finals underway in Dakar, Senegal.

It took only two minutes for Nelson to score the opening goal.

However, Egypt did not take it lying down they equalized through Hassane Hassan to force the first-half at 1-1.

In the second phase of the game,  Egypt went ahead when Ahmed Mohamed scored the second goal then another one. Eventually, Hossan scored twice to claim a hat-trick.

However, Mozambique reorganized themselves with Nelson and Rachid scoring in quick succession.

In a post-match interview, Mozambique coach Nélson Manuel said: “First of all to say that this is the result of hard work done by the coaches, players and the federation itself and all its staff that has a lot of support for us. Therefore, it is the result of our commitment and dedication. ”

Next, Mozambique date Seychelles who are smarting from a 5-1 loss to Morocco.