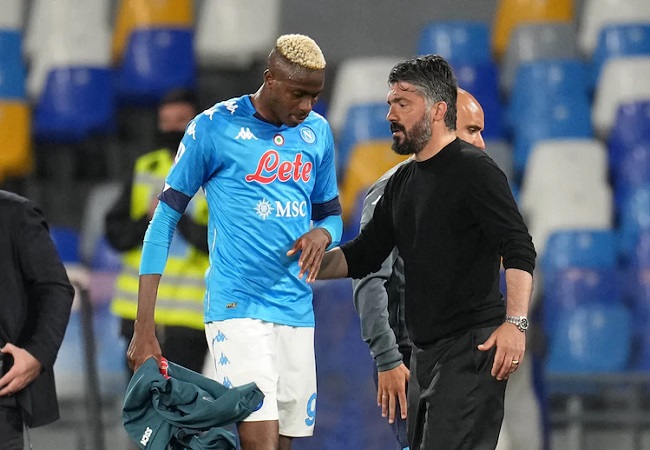 Napoli coach Gennaro Gattuso stepped down as the club’s manager after the final game of the season against Hellas Verona. Gattuso left his role as Napoli’s manager after failing to guide the team to a top-four finish. And Victor Osimhen has reacted to coach’s departure from Napoli.

Napoli had their fate in their hands going into the final round of Serie A games this season. However, they missed out on Champions League football following a 1-1 draw against Hellas Verona on Sunday night.

The club announced Gattuso’s departure following the match, although he has now taken up the Fiorentina coaching job.

Gattuso brought Osimhen to Naples from Lille in a deal that made the Nigerian international the club’s record signing.

Although Osimhen’s season was impacted by injuries and coronavirus, he still managed to score ten goals in 24 league games under Gattuso.

The Nigerian international has now thanked his former boss for his development in his first year in the Italian top-flight.

Osimhen took to his Instagram to thank the new Fiorentina coach for contributing to his growth as a player and as a man.

“You have been instrumental towards my development. Not just as a player but also as a man. I really appreciate all you do for me on and off the pitch. I admired you as a player and to be able to work under you. And call you my BOSS is something I will never forget in a rush 100%. I hold you on high esteem forever. I wish you all the very best on your new adventure BOSS.” Wrote the Nigerian international.

Meanwhile, Napoli are expected to announce a new manager later this week.