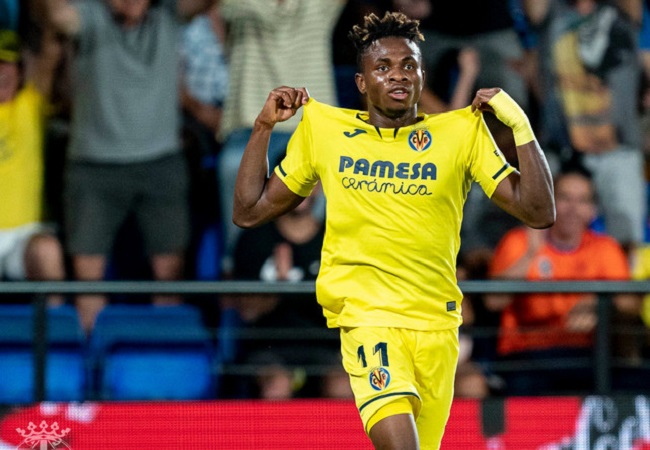 Villarreal will take on Manchester United in the Europa League final on Wednesday night. And Samuel Chukwueze could be just the second Nigerian after Alex Iwobi to score in a European club competition final.

Iwobi scored Arsenal’s consolation goal in the 4-1 loss to Chelsea in the Europa League final two years ago. Game that took place at the Olympic Stadium, Baku.

Chukwueze now has the chance to do the same- although he would be hoping for a different result on Wednesday. The former Golden Eaglets star has scored once and provided five assists in the competition this season.

He was initially a doubt for the showpiece after picking up an injury in the second leg of their semifinal clash against Arsenal.

Chukwueze suffered a muscle injury and was expected to miss a month of action. However, he made a quick return. And he is part of the travelling party to Poland.

It remains to be seen if he gets to start. But he’s definitely going to play a part as Villarreal hopes to cause an upset.

Villarreal are for their first major European trophy, while United will be aiming to win their second Europa League title.

Should the Yellow Submarines triumph, Chukwueze would be the sixth Nigerian to win the Europa League. Kanu Nwankwo and Taribo West are the first two Nigerians to win the competition with Inter Milan in 1998.

Chid Odiah also won it with CSKA Moscow in 2005 after John Mikel Obi and Victor Moses both won it with Chelsea in 2013.