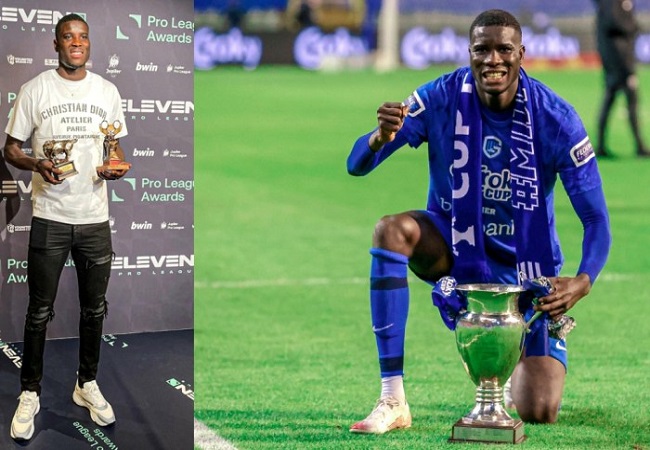 Paul Onuachu has admitted that the Belgian First Division A is a challenging championship. But the determination to push himself beyond the limit helped him become the best in the country.

The Nigerian international struggled in his first year in Belgium. He however won the hearts of many after delivering numerous excellent performances.

On Monday, Onuachu was voted by his peers as the Pro Footballer of the Year. This came in addition to the top goalscorer award he claimed for finding the back of the net 33 times in 38 league matches for KRC Genk.

The 26-year-old only managed nine goals in 22 matches in his maiden campaign last season after completing his switch from Danish side FC Midtjylland.

But his turnaround in fortunes, 12 months later, has been evident for all to see. Onuachu is clear about how he was able to improve his efficiency in front of goal.

“This award means a lot to me. Because the Belgian championship is a very difficult competition.” The Genk forward told Eleven Sports.

“I struggled a bit when I arrived here. At the start of the season, I said to myself that I had to push myself more and give more.

“I am proud of myself and my team. And I am happy to have the support of my companion, who is always behind me.”

Lazio, Sevilla, and Lyon are among the top European clubs already looking to lure Onuachu to one of the continent’s big five leagues.

The big striker, however, refuses to hide his affection for English Premier League giants Arsenal.

“Arsenal is the club of my dreams.” Onuachu continued.

“It is the club that I support, that I like to watch, and whose style of play I like.

“However, I am still in Belgium. And I am still a player of Genk.” He added.

In a record-making year, Onuachu’s 33 league goals make him the first player since Wesley Sonck in the 2001-2002 season to exceed the 30-goal mark.