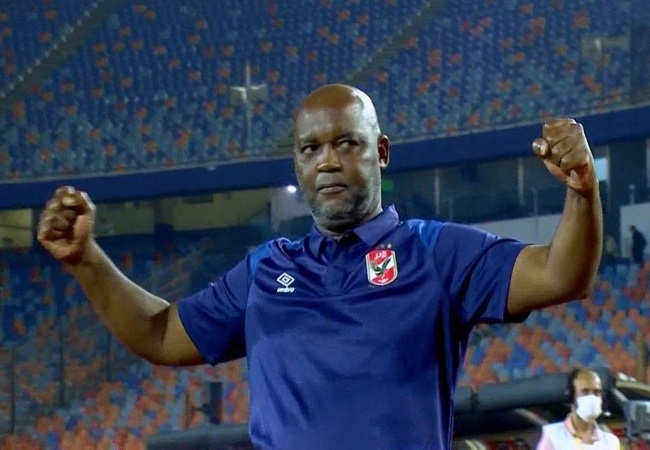 The Cairo giants Al Ahly are scheduled to face Tunisian-side Esperance in the first leg of the African Champions League semifinals to take place on 18th June, while the second leg will be played on 25th June.

“The game against Esperance will be difficult as they are a big team with a special coach. But Ahly are always ready for the big games.” Mosimane told the Ahly TV channel.

“We played bigger games like Bayern Munich at the FIFA Club World Cup, Zamalek at the African Champions League finals. And we even faced tough opponents like Pyramids FC, Masry and Ittihad of Alexandria in the Egyptian League. So we are always ready for the big events.” The South African coach added.

The 56-year-old coach revealed that one day Ahly can win the FIFA Club World Cup. But that it’s not an easy mission to achieve.

“I told the players that they have a big chance to draw history with the team. And we are working to achieve our targets.” Said Mosimane.

“It’s not easy to claim the FIFA Club World Cup title. But we can still do it.” He added.

Mosimane made an impressive start to his Ahly adventure since joining the team after the departure of Swiss Coach Rene Weiler. He guided Ahly to the African Champions League, the Egypt Cup and African Super Cup titles.

He led Sundowns to a host of titles, during a highly-successful eight-year reign, before taking charge of Ahly in October last year.

“Sundowns’ players concentrate on tactics and speedy moves. But Ahly’s players are better in their building as they concentrate on the organised work to achieve their target.” Said Mosimane.

Ahly are second in the Egyptian premier League table with 41 points, 14 points behind temporary-leaders Zamalek, as the Red Devils need to win four games in hand to overtake their rivals.