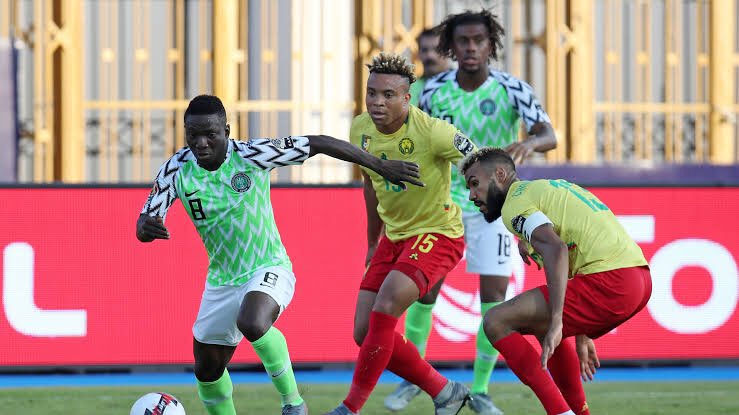 The Indomitable Lions of Cameroon put an end to Super Eagles domination over them with a 1-0 win at the Stadion Weiner Neustadt, Austria on Friday.

Super Eagles headed to the game on the back of their dominance over the Indomitable Lions in the recent years.

It was Nigeria that came close to breaking the deadlock just three minutes of play with Paul Onuachu’s header saved by Cameroonian goalkeeper.

Two minutes later, the Genk forwad saw another opportunity but  skewed in.

With Nigeria failing to capitalize on their chances, Zambo Anguissa scored for Cameroon in the 31st minute.

The Super Eagles made many efforts to level before the break but the Indomitable Lions held on to the 1-0 lead going to the first half.

The Super Eagles continued their domination in the second half with Kelechi Iheanacho and William Troost-Ekong coming close t9 levelling.

Gernot Rohr handed Terem Moffi his senior debut in the 65th minute as he replaced Onuachu.

Rohr made two more changes with 10 minutes remaining on the clock as Anayo Iwuala took the place of Simon while Peter Olayinka made his debut also coming for Oghenekaro Etebo.

Bothteamsm will meet again for another friendly on June 8 at the Weiner Neustadt Stadium.