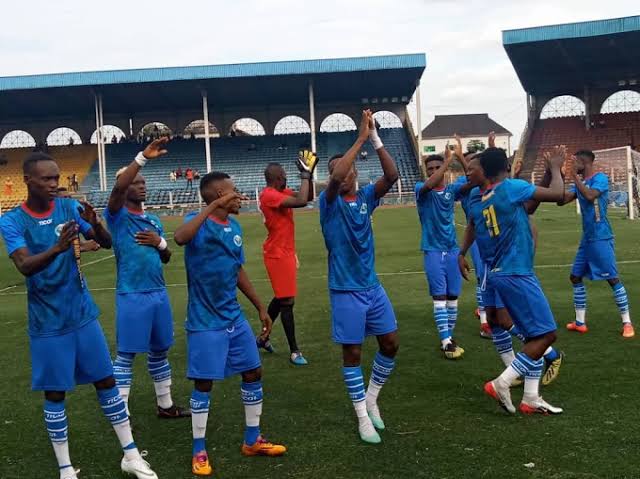 Warri Wolves returned to winning ways in the Nigeria Professional Football League (NPFL)following a 2-1 win over Sunshine Stars at the Ozoro Polytechnic Stadium.

The Seasiders having lost 1-0 to Katsina United away climbed away from the relegation zone after the win as Matchday 25 of the NPFL produced stunning moments.

A brace from Mark Daniel who scored in the 44th minute and 79th minute was allWarri Wolves needed to move a step away from the Waterloo.

Fajoubi Ekeleojuoti’s added time goal could not salvage a drowning Sunshine Stars from another poor outing.

Elsewhere in Matchday 25 of the NPFL which saw total of 25 goals  with just two away win, Kano Pillars bounced back from a goal down to beat Enyimba 2-1.

The Sai Ma Su Gida side with the victory returned to top of the NPFL summit after Akwa United played put a 2-2 draw against Wikki Tourists in Bauchi.

Elsewhere in Uyo, Lobi Stars stunned Dakkada FC 1-0 to run away with all three points in the second away win of Matchday 25.

There was no love lost in the Oriental derby of Matchday 25 as Abia Warriors and FC IfeanyiUbah shared the points in Okigwe.

Rivers United shared the spoils with Heartland FC in Owerri in a 2-2 draw while at the Muhammadu Dikko Stadium, Katsina United boosted their survival hopes with a hard-fought 2-1 win against Nasarawa United.