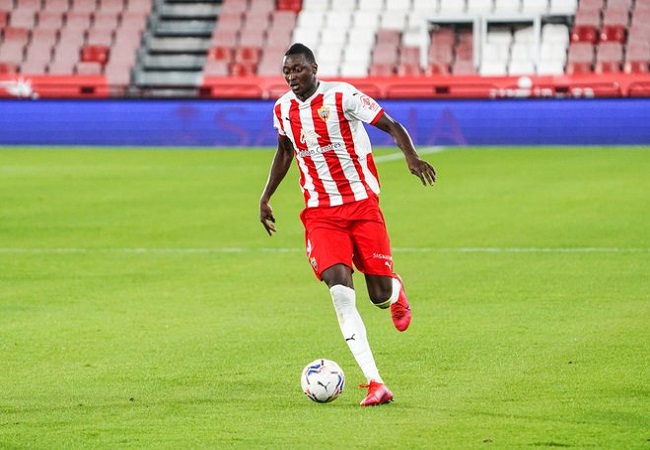 Umar Sadiq is highly in demand after scoring 22 goals with seven assists in all competitions for Almeria last season. And Manchester City have jumped ahead of a long list of clubs interested in signing Almeria goalscoring machine.

According to AS, the Premier League champions want to sign the prolific Super Eagles invitee. And they will instantly loan him to newly-promoted Troyes, where he will play in the French Ligue 1 next season.

La Liga giants Sevilla and Villarreal have both been credited with interests in the former AS Roma starlet. In contrast, both Spartak Moscow and Eintracht Frankfurt have already submitted their offers for the Nigerian.

But financial powerhouse Man City should have no trouble coughing out the transfer fee of €30 million, which Almeria have slapped on Sadiq.

However the former Nigerian youth international may not appreciate the Premier League giants’ plan of loaning him to Troyes immediately.

Manchester City had a similar plan when they acquired Nigeria’s Kayode Olanrewaju from Austria Wien in 2017, only to loan him to Girona in Spain instantly.

The former Maccabi Netanya man never made a single appearance for the Citizens before Shakhtar Donetsk signed him two years later after yet another loan spell.

Kaduna-born Sadiq has a contract with Almeria until 2025 with a buy-out clause of €60 million.