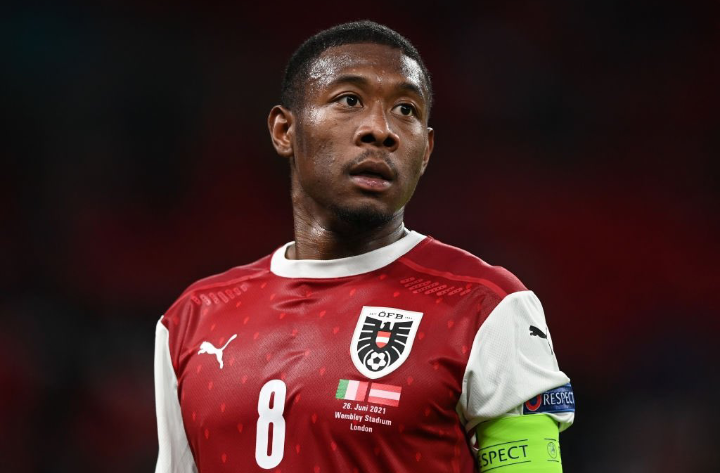 Austria captain David Alaba could not find the perfect words to describe their exit from the Euro 2020 despite their outstanding performance against Italy.
Austria lost 2-1 in a pulsating round of 16 against Italy at the Wembley Stadium in extra time.
Both teams failed to score in 90 minutes as the game went on to extra time.
Substitutes Federico Chiesa broke the deadlock in the 95th minute to give the Azzurri the lead.
Matteo Pessina doubled the lead in added time of the first half.

Sasa Kalajdzic restored hope to Austria scoring in the 114th minute but his goal turned out to be a consolatory goal as the game ended 2-1.
Alaba while speaking after the game said it was unfortunate their performance was not rewarded with a victory.
“It’s not easy to put that into words.
“We can be proud of ourselves, Austria can be proud of us.
“We gave everything but in the end we weren’t rewarded for our performance.
” That’s really tough to take.”
Also in his post-match interview, Austria head coach Franco Foda while speaking with ORF said despite the defeat the country is still proud of the team.
“I have never received so many compliments from an opponent.
You saw over 120 minutes that it was a very mature performance.
“It was incredible how the team kept it alive in extra time. It was a great game.”

“We are all disappointed, of course.
“But the whole of Austria can be proud of this team.
“At the start, we wanted to attack high, but Italy were too strong and were able to play their way through our press.”
Foda said his focus will now turn to September when the FIFA World Cup qualifiers will kick off.
“Now it’s about backing that up when we return in September.
“You saw that the team was hungry and had a good spirit and a good plan.
“From September, we need to prepare ourselves as best as possible because we want to go to the [FIFA] World Cup in Qatar.”

Their last one at any major international tournament was at the 1954 World Cup.