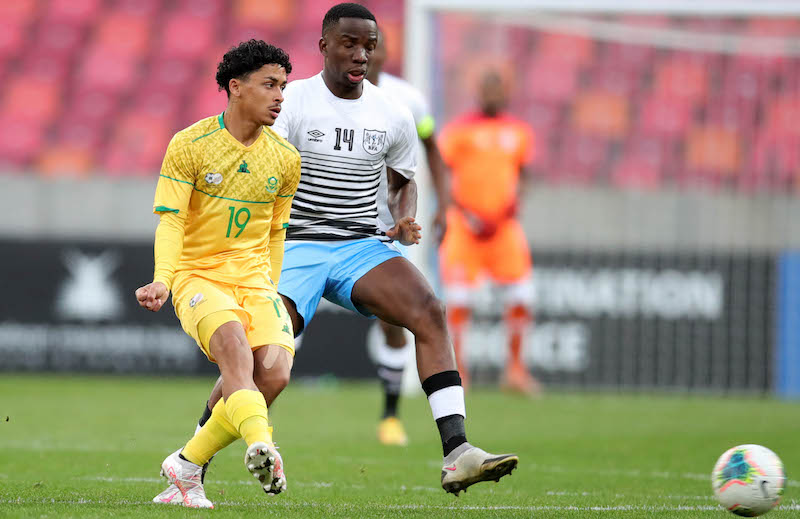 Hosts South Africa started the 2021 Cosafa Cup with a 1-0 win over Botswana at Nelson Mandela Bay Stadium on Tuesday evening.

Substitute Kagiso Malinga scored deep into the second-half to put the hosts at the summit of Group A with three points at par with second-placed Eswatini.

Malinga came off the bench to curl in the winner after drifting wide on the left before bending the ball to the other end away from the reach of Botswana goalkeeper Ezekiel Morake.

The Zebras had started the match the better of the two teams with  Mbatshi Elias smashing the upright.

Earlier, Eswatini beat Lesotho 3-1 at the same venue and are on second place in the group on goal-aggregate.

Forward Felix Badenhorst scored straight from a free-kick with three minutes to half-time to deflate Lesotho who were down to 10 men after Jane Thaba-Ntso saw red for  a careless open-stud challenge.

Lesotho did score on the stroke of half time through a wonderful Tumelo Khutlang free-kick.

On Wednesday, it is now the turn of matches for Group B with Zimbabwe playing Mozambique then guests Senegal and Namibia completing the day’s assignments.

The tournament has pooled 10 teams split into five each with group leaders to make it to the semifinals.

Madagascar and Comoros withdrew from the competition due to Covid-19 travel restrictions.