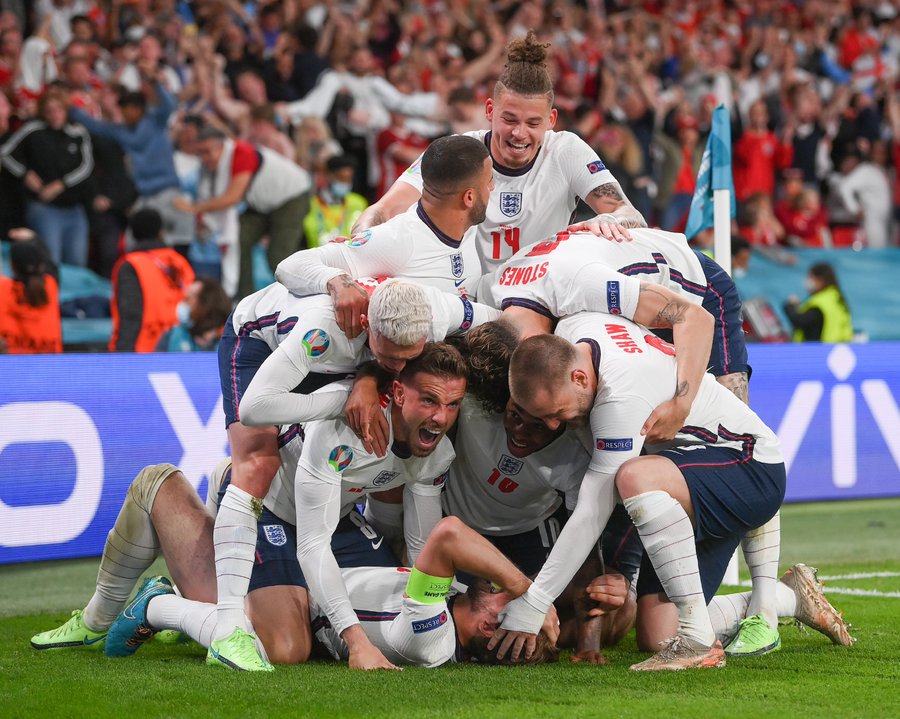 England date Italy at Wembley Stadium on Sunday in what is the Three Lions first final appearance in the competition. It was all thanks to Kane’s fourth goal of the tournament.

Pierre-Emile Hojbjerg had fouled advancing Raheem Sterling  while zigzagging his way in the danger zone to gift the Three Lions the late winner. Kane finished off Denmark goalkeeper Kasper Schmeichel’s initial save.

The first-half of the much anticipated semi-final clash between England and Denmark had produced thrills with scores at 1-1.

Scoring chances were plenty on both ends in front of vocal partisan 60,000 crowd.

In the 14th minute, Kane volleyed over the bar minutes after Sterling had sent a shot weakly straight at Schmeichel’s palms.

Thereafter, as the Dane pressed high up the pitch, the England keeper nearly gifted the visitors a goal through an ill-timed goal-kick which was intercepted before striker Martin Braithwaite flashed his sharp effort wide.

However, there was no stopping Denmark on the half-hour mark when Damsgaard scored via a delightful free-kick which sailed over jumping England wall, with Kane at the tip of the rising pyramid, and dipped just above and wide of desperately flying Pickford.

England thought they had replied in the 37th minute but Schmeichel spread himself big to deny Sterling from point blank range in stunning fashion.

A minutes later, the Three Lions roared back into the contest when Sterling heeled the ball across the goal line via the feet of Denmark skipper Simon Kjaer who threw himself down trying to cut Saka’s hard and low cut back from the right corner in a blistering counterattack.

From then on it was game on.

In the 50th minute, Denmark threatened this time around there was no beating Pickford as he dived low to keep out Thomas Delaney shot from the edge of the area.

Four minutes later, the action swung to the other end of the pitch where Schmeichel dived full length to keep out Harry Maguire’s header.

The game ended 1-1 in 90 minutes paving the way for extra-time which saw Schmeichel once again denying Kane with a low one-handed save before the Leicester City keeper palmed away substitute Jack Grelish’s effort.

However, when Sterling danced his way into the box in the first half of extra- time, England found a way to win the game. Surely, the ‘It is coming home’ vibe is on track.