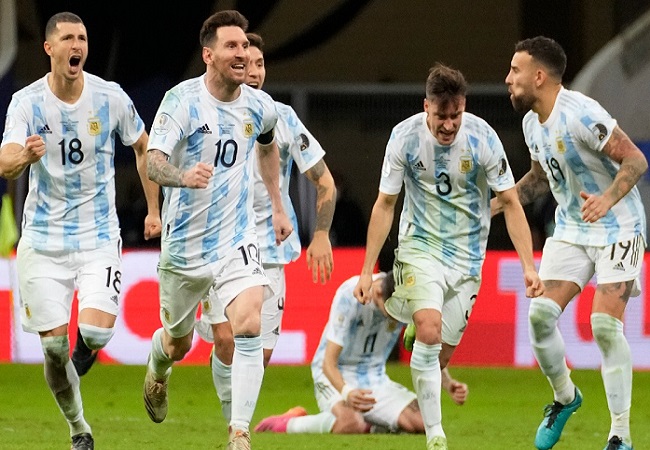 Goalkeeper Emiliano Martinez was the hero as Argentina defeated Colombia on penalties on Tuesday. Lionel Messi and teammates could hope to lift the throphy as they’ll play Copa America final against Brazil of Neymar.

Also Read : LIONEL MESSI IS THE BEST OF ALL TIME – ARGENTINA COACH

Argentina stopper Martinez saved three penalties in the shoot-out after a bruising 1-1 draw in Brasilia.

Two years ago a Brazil team missing the injured Neymar knocked out Argentina in the semi-finals. And they clinched their ninth Copa title on home soil.

For Messi, 34, time is running out to win a first major international title with his national team. He previously lost in three Copa finals and the 2014 World Cup final.

For once he wasn’t his country’s main hero, although he did create the opening goal for Lautaro Martinez on seven minutes, before Luis Diaz equalized just after the hour mark.

In the shoot-out, goalkeeper Martinez three times dived to his left to save penalties from center-backs Davinson Sanchez and Yerry Mina, as well as midfielder Edwin Cardona.

And although Rodrigo De Paul skied his penalty for Argentina, Messi — who finished with blood seeping visibly from his left ankle  — was amongst the scorers to give them a 3-2 victory on spot-kicks.

Saving penalties “is a question of luck. And today, it was my turn to be the glorious one.” Said Martinez.

“We said it the first day. We want to play the final and what better than playing Brazil on their pitch.”

Argentina and Colombia were actually supposed to be joint hosts. But South American football’s governing body CONMEBOL switched venues at the 11th hour due to the coronavirus pandemic and social unrest in Colombia.