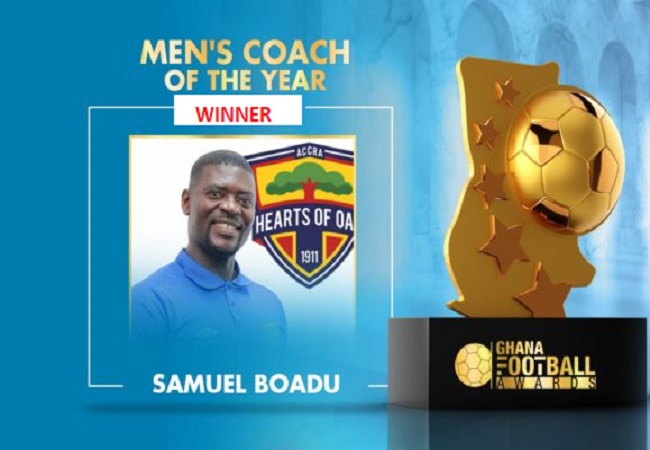 Accra Hearts of Oak head coach, Samuel Boadu won the best coach of the year at the 2021 Ghana Football Awards. Award ceremony that took place at the Grand Arena in Accra. And the coach presented his Best Men’s Coach of the Year Award to the club’s Board Chairman, Togbe Afede XIV at his office in Accra on Thursday.

The 35-year-old was at the office of the club’s Board Chairman and Majority Shareholder at the Trade Fair Centre to present the award to him.

Boadu beat off competition from Great Olympics’ Annor Walker and Ghana U20 gaffer Karim Zito to clinch the accolade.

The enterprising gaffer joined Hearts of Oak on a three-and-half year deal prior to the commencement of the second round of the 2020/21 Ghana Premier League season after parting ways with fellow Premier League side Medeama SC.

Boadu is on course of winning the ongoing Premier League with Hearts of Oak in his first season at the club.

The Phobains have not won the Premier League for the past 12 years. Hearts of Oak will host Liberty Professional at the Accra Sports Stadium in the matchday 33 games on Sunday.