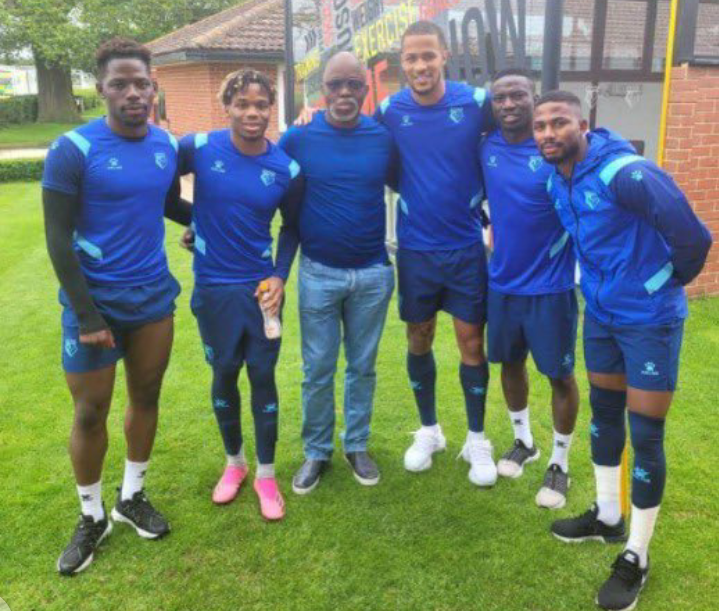 President of the Nigeria Football Federation(NFF) Amaju Melvin Pinnick said he wants to build a stronger relationship with Watford.
Pinnick on Saturday visited the Super Eagles players at Watford following the signing of Oghenekaro Etebo on Friday who joined the club on loan from Stoke City.
With the midfielder’s arrival, Watford now parades five Nigeria internationals in their squad ahead of the 2021-2022 Premier League season.

Read Also: Etebo Prays For A Successful Campaign With Watford

The NFF President while speaking said he will also meet with the Chief Executive of Watford as well as that of Everton.
He also noted that out of the five players, only three players were regular players.
“We have potentially 5 Super Eagles players in Watford FC, but now only 3 regular players so the NFF needs to build a stronger relationship with Watford.
“I am scheduled to meet with the Club President and CEO in the next few weeks.
“We Will also meet with the CEO of Leicester, Everton et al in the coming weeks.”
William Troost-Ekong, Emmanuel Dennis Bonaventure, and Etebo are probably the three players Pinnick referred to as Tom Dele-Bashiru and Isaac Success struggled to get a starting shirt with the Hornets who regained promotion back to the Premier League.