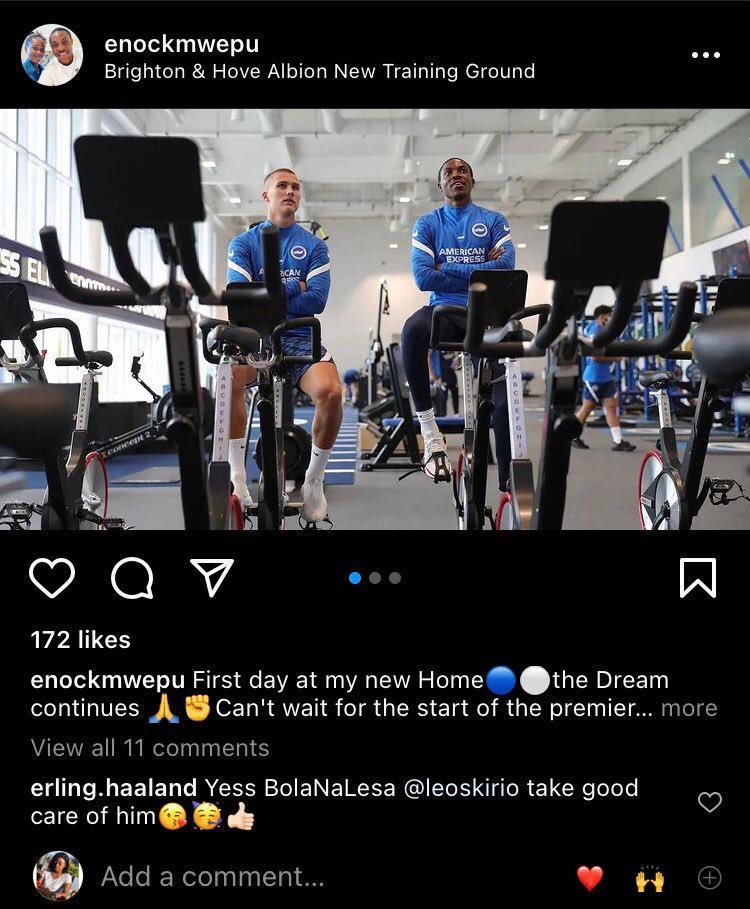 Zambian winger Enock Mwepu has shared his feeling of his first day in training with Premier League side, Brighton & Hove Albion.

The former Red Bull Salzburg player described the experience of training with  Brighton as  ‘living’ his dream.

“First day at my new home. Living my dreams continues. Can’t wait to the start of the premier league #pre-season,” he tweeted on @EnockMwepu45 on Tuesday.

In reply, a followed known by The Football Semantic on @footiesemantic tweeted: “Another deadly Zambian heading to the Premier League! Decisive in transition, his tendencies of ball carrying & incisive passing when in deficit situations will help Brighton’s possession game. Strong & quick, Mwepu can serve as an intelligent outlet too. Great potential!”

The midfielder joined Albion last week on a four-year deal from the Austrian Bundesliga champions, Salzburg.

The 23-year-old had arrived in England with a good reputation, having made 20 appearances in the Europa League and Champions League while with Salzburg.

According to StatsBomb’s data, on Mwepu ranks inside the top 1% of all attacking midfielders/wingers across such competitions for (per 90 minutes) pressures (27.2), tackles (3.6) and shots plus passes blocked (3).

In the last Champions League, Mwepu was a Salzburg chart-topper across multiple metrics, evidence of his ability to influence the game both with and without the ball, Albion website reports.

Mwepu’s former Salzburg teammate, Patson Daka has also joined Leicester City whereas another rising Zambian Fashion Sakala is now with Rangers FC in Scotland after securing a dream move from Oostende in Belgium.

Mwepu and Daka have joined  a rare league of Zambians to grace the Premier League after Collins Mbesuma (Portsmouth) and Emmanuel Mayuka at Southampton.