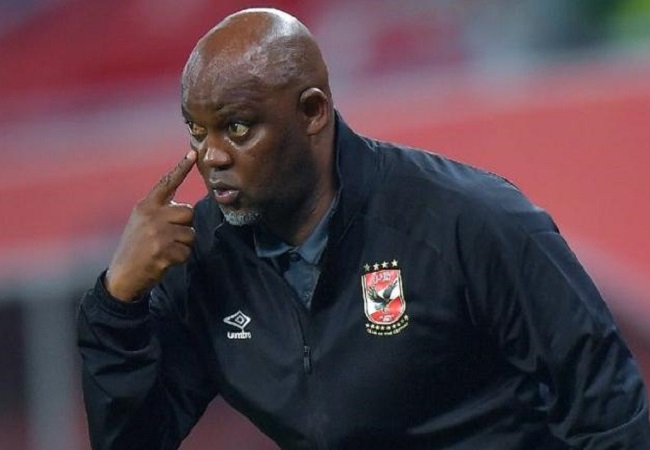 Al Ahly of Pitso Mosimane who are the defending champions , will meet the Soweto giant Kaizer Chiefs in the Champions League final at Stade Mohammed V in Morocco. Game to kick off on Saturday at 19:00 GMT. While it’s the Glamour Boys’ maiden final, the Red Devils have already won this intercontinental premier club competition nine times.

And Wayne Arendse who had worked worked with coach Pitso Mosimane for almost eight years at Mamelodi Sundowns, has revealed how he expects his erstwhile mentor to approach the eagerly anticipated CAF Champions League final against Kaizer Chiefs.

Arendse, who played a crucial role in Mosimane’s maiden Champions League triumph when he was still at the Brazilians in 2016, thinks he knows how the Al Ahly coach will go about his approach against Amakhosi. The 36-year-old centre-back foresees Al Ahly going all out to draw the first blood.

“Obviously, Pitso respects Chiefs. And he will be cautious a bit because he knows they [Chiefs] also have good players. But at the same time, knowing him, he wants to score.’’ Arendse told Sowetan on Thursday.

The former Santos skipper unveiled that Mosimane’s philosophy is always modelled on scoring first. Arendse reckons the North Africans won’t sit back at all.

“The quicker he [Mosimane] can get the goal, the quicker his team can settle. Because his teams always fight to score first. If they score first, Chiefs would have to come out and that would expose them at the back.’’ Said Arendse.

“Pitso always wants to score. That’s how he plays. He always thrives on trying to get the first goal. He imposes his game-plan. And that’s how he’s been playing all the years… He imposes it and forces his opponents into making mistakes. I don’t see Al Ahly sitting back. That’s not Pitso’s style.’’

Arendse insinuated knowing Chiefs in and out, having faced them numerous times when he was at Downs, can aid Mosimane tomorrow. However, Arendse, who’s unattached after leaving Chloorkop last November, feels the neutral venue gives both teams equal chance to win the game.

“Pitso knows what Chiefs are about. He knows their weaknesses and all that… He knows SA football whereas on the other hand Chiefs have probably watched a few games of Al Ahly. And they don’t know the depth of each and every player.’’ Stated Arendse.

“It’s going to be a very tactical game. Obviously, the game being played at a neutral venue and it being only  one leg, it’s anyone’s game. Anyone can win it.’’ He concluded.