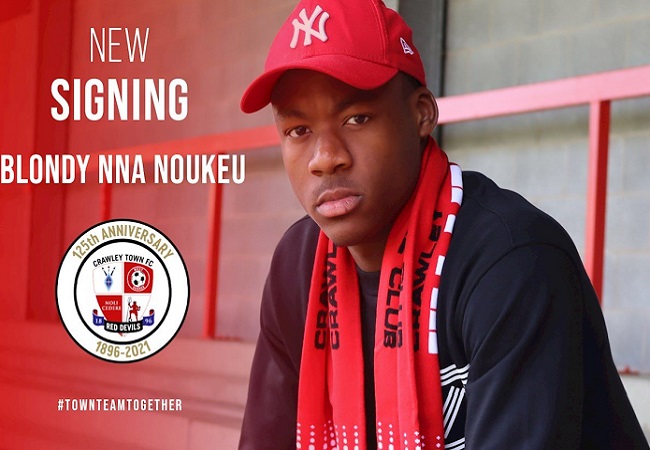 At 20-years-old, Noukeu is a young goalkeeper but he has real pedigree. He was recently handed a new long-term contract at the Potters as a reward for his progress.

Noukeu also earned a call up to the Cameroon national team. He was part of The Indomitable Lions’ 32-man squad to take on Cape Verde in an African Cup of Nations qualifier on March 26. He had previously been a part of Cameroon under-21 camps.

Before his move to Stoke, Noukeu played his youth football in Belgium for Royal Excel Mouscron. The young stopper was also eligible to play international football for Belgium. But he chose Cameroon when they came calling first.

“Blondy came down to train with us at the end of last season. He’s a very good goalkeeper. And we’d like to thank Stoke for agreeing to the deal. Let’s hope Blondy can enjoy his season here at the club.” Manager John Yems said.

“Blondy will provide good backup to Glenn. He has the potential to be an elite goalkeeper. And we are excited to have him with us.” Chief executive Erdem Konyar added.

“The signing came about through a contact of mine at Stoke, Dave Rouse, who is their first team goalkeeping coach.” Goalkeeping coach Dean Lightwood said.

“I have had lots of contacts both from clubs higher up the pyramid looking to loan out young goalkeepers who are looking for football league experience and from agents regarding out of contract goalkeepers.

“Blondy was one of a handful of goalkeepers that we had shortlisted. And he impressed us when he came in to train for a week towards the end of last season.

“We are grateful to Stoke City for allowing Blondy to come on loan. It’s a move that will be beneficial for both parties with Blondy able to gain regular first team exposure and Crawley Town securing an extremely promising young goalkeeper on loan for the season.” Continued the coach.

Noukeu made his Reds debut in their 1-0 win at Three Bridges in a friendly on Friday night.

Davide Rodari’s magnificent 26th minutes strike from the edge of the area was the difference between the two sides.