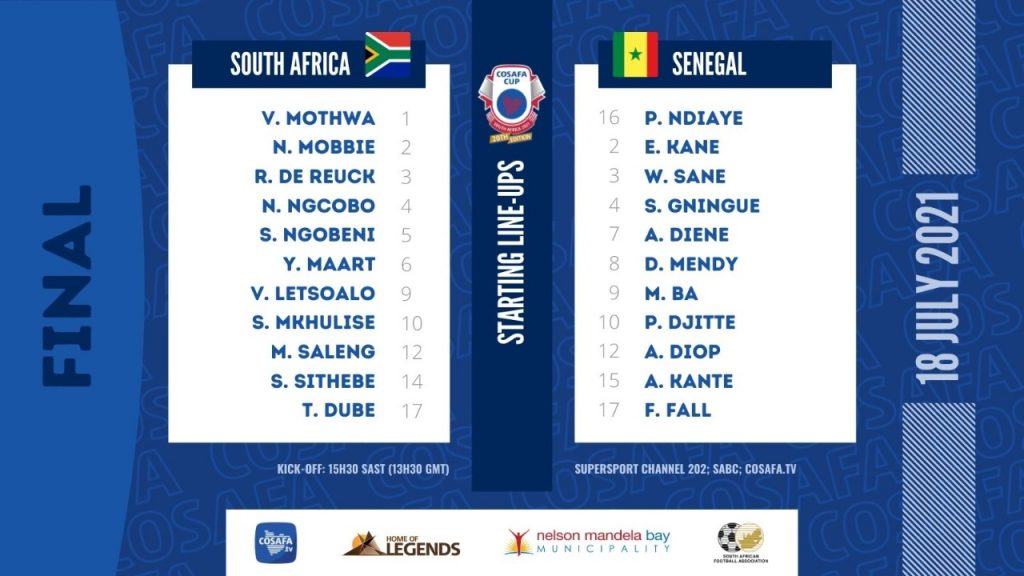 Senegal and South Africa are set to bring the curtain down on the Cosafa Cup when they meet in the final at Nelson Mandela Bay this afternoon.

Bafana Bafana are chasing a  ninth title whereas the guests, Senegal want to add Cosafa Cup to the Wafu trophy they won in West Africa.

In an earlier kick-off at the same venue, goalkeeper Mathabela Sandanzwe scored a decisive spot-kick as Eswatini defeated Mozambique 4-2 on post-match penalties to win bronze medal.

The two teams had drawn 1-1 in regulation time of the third-place play-off at Nelson Mandela Bay in Port Elizabeth in a lunch-time kick-off.

Martinho Thauzene had scored for Mozambique in the 39th minute only for the Mambas to allow Eswatini back into the game.

With a minute to full-time, Eswatini snatched the equalizer through Khethokhule Mkhontfo before the game went into the post-match penalties.

During the post-match penalties, Mathabela saved one of Mozambique’s attempts then stepped forward to score the fourth attempt and earn Eswatini the victory.

The two teams battled for the third place after losing their respective semifinals.