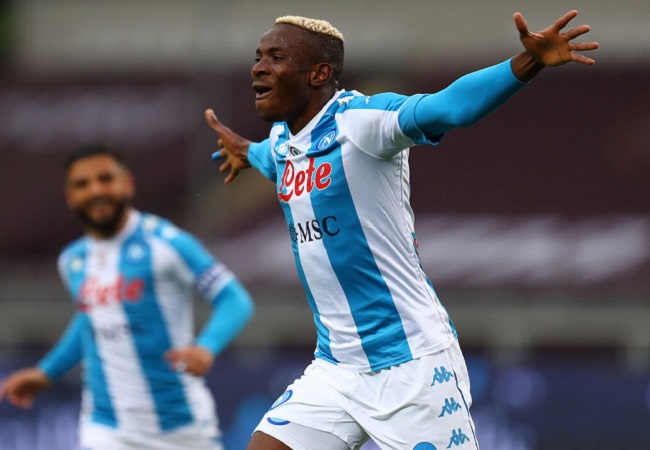 Napoli secured a narrow victory over Pro Vercelli at the Stadio Comunale on Saturday afternoon. And it was the Nigerian international striker Victor Osimhen who scored the match’s only goal.

In what is Napoli’s second and last friendly match in Dimaro, Osimhen made the difference. The Super eagle popped up midway through the first half to send home a fine header after a Mario Rui corner bubbled about in the box.

That winning strike is Osimhen’s fifth in two games after he found the back of the net four times in 37 minutes when Luciano Spalletti’s men thrashed Bassa Anaunia earlier in the week.

Osimhen’s goals are what everyone associated with Napoli is hoping for next season as the club target titles in the Italian Serie A, the Italian Cup, and the UEFA Europa League.

Napoli next travel to the Allianz Arena in Munich to take on Bundesliga champions Bayern Munich as they step up their preparations ahead of the 2021-22 season.

The Azzurri face newly-promoted Venezia in the opening weekend of Serie A on August 22. A tie which could see Osimhen go against international teammate Tyronne Ebuehi.