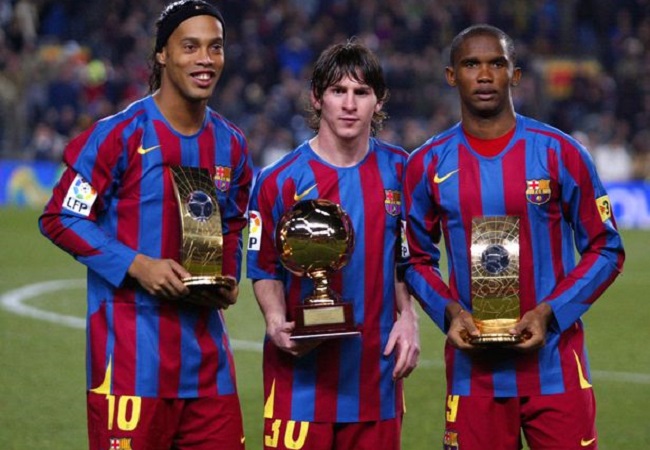 The contract of Lionel Messi expired at the Spanish giants, Barcelona. And the Argentine international has been a free agent 1st July.

Ronaldinho has told Messi that he “must stay” at Barcelona amid the Argentine superstar’s contract dispute with the Catalan club.

Messi, 34, inherited Ronaldinho’s No.10 shirt when the midfielder left the club for AC Milan in 2008.

The Nou Camp hero has become a global superstar during his time in Barcelona. But he faces an uncertain future after his mega-money contract expired at the end of last season.

And two-time World Player of the Year Ronaldinho believes that Messi’s contractual negotiations must be sorted out in order to allow him to re-sign for the Spanish giants.

“He must stay. He is the history of Barca. When Messi retires, which I hope will be in a long time, he can leave the No 10 there. And nobody will touch it again.” The Brazilian told TuttoMercatoWeb.

The Cameroon legend Samuel Eto’o earlier explained how he believes the Argentine will stay at Barcelona, despite his uncertain future.

“I can’t imagine Leo with another shirt.” said Eto’o. “It is his club, his home, his love. I do not think that his continuity is due to a question of money. Leo is Barcelona and Barcelona is Messi.

“I know [president Joan] Laporta is preparing reliable, interesting project for him.” He added.

Messi joined the first-team setup in 2004 in a side which contained both Eto’o and Ronaldinho.

Following the expiration of his contract at the end of last month, it is reportedly said Messi has been offered a contract. But the club’s financial situation has prevented the deal from taking place.

Messi is expected to take a large pay cut in order to comply with salary demands in Spain.