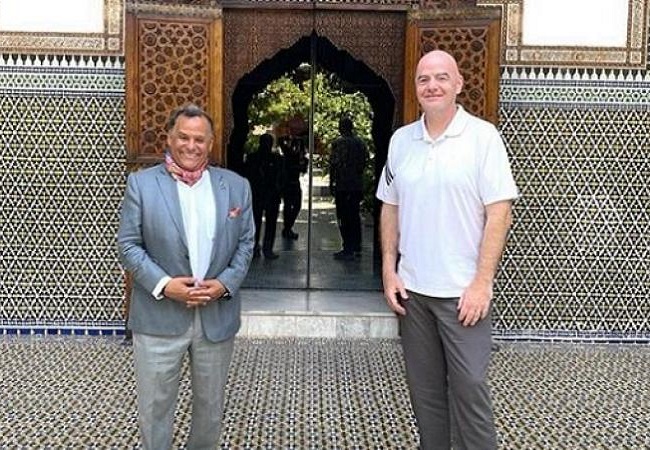 On Tuesday, FIFA President, Gianni Infantino visited the Dar El Bacha museum in Marrakech. A cultural Center inspired by the Moroccan legacy located in the heart of the old medina.

The visit of a high-profile personality from the world of sport to a Moroccan museum with an international vocation shows the richness of the national legacy through a place of culture considered to be one of the most beautiful palaces in Marrakech.

Infantino was fascinated by the beauty of the place with its multi-coloured zellij ceiling and Andalusian-style architecture.

This meeting between the world of sport and that of culture, in the footsteps of the secular history of the Shereefian Kingdom, was an opportunity to shed light on the role of museums in boosting tourism in Morocco.

After a tour in the heart of the museum, alongside with the president of the National Museum Foundation (FNM), Mehdi Qotbi, the FIFA president signed the Golden Book. The world football boss thus marked with his imprint a meeting between two worlds. And this highlighted the importance of culture in the development of the country.

The Dar El Bacha museum is a place of discovery of the richness and diversity of Morocco’s legacy, which contributes to the development of the tourist offer, underlined the president of the FNM, Mehdi Qotbi, in a statement to MAP on this occasion.

Managed by the National Museum Foundation and located in the heart of the old Medina of Marrakech, Dar El Bacha was built in the 1910s.

Dar el Bacha, now called “Musée des Confluences“, testifies to the cultural and heritage contributions – material or immaterial – which forged the identity of the country. The cultural center has welcomed more than 250,000 visitors so far.