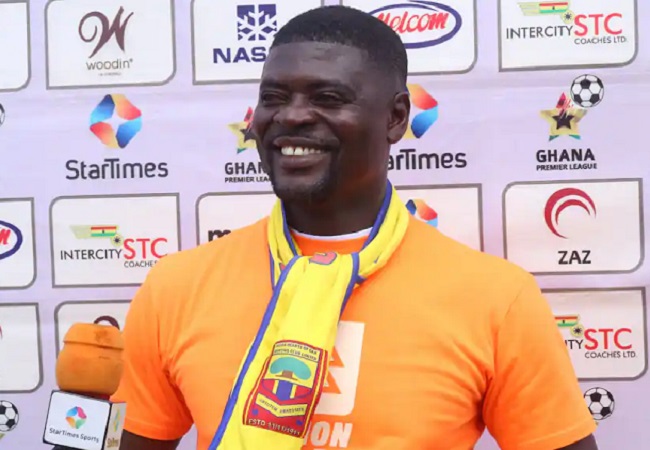 Accra Hearts of Oak coach, Samuel Boadu, has been adjudged the best coach for the month of June in the Ghana Premier League (GPL). This was after they ended the season as champions.

The Ghana Football Association (GFA) confirmed Samuel Boadu as coach of the month on their official website.

“Samuel Boadu of Hearts of Oak has been adjudged as Ghana Premier League Coach of the Month for June. Coach Boadu has won the award for the second consecutive month after masterminding Hearts of Oak’s three wins and one draw recorded last month.” Wrote the FA.

Boadu led Hearts of Oak to three victories and a draw in the Month of June, including the famous 1-0 win over fierce rivals Kumasi Asante Kotoko in Accra.

It is the second month in a row that the former Medeama gaffer has won the award. This new trophy comes after he was also named coach of the month in May.

Samuel Boadu will receive a television set from Ghana Premier League sponsors NASCO as well as a personalized trophy. Meanwhile, West Africa Football Academy youngster, Augustine Boakye, was named player for the month of June following his exploits with the Academy Boys. He scored two goals and provided two assists in the month. And he was twice man of the match in June.

We should note that defending FA Cup champions, Kumasi Asante Kotoko, have been eliminated from the competition after suffering defeat to Berekum Chelsea on penalties in the quarter finals.

The Porcupine Warriors’ season has ended without a trophy after losing the Ghana Premier League title to rivals Hearts of Oak. The Kumasi-based club had an opportunity to win the game against Chelsea in the first half when the referee awarded them a penalty. But Brazilian playmaker Fabio Gama missed from the spot.