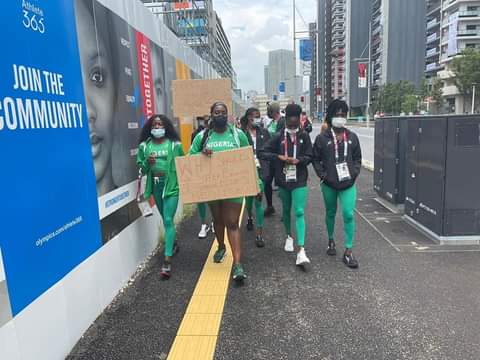 The Ministry of Youth and Sports Development  has stepped in to stem further crisis by  addressing the issues that have arisen concerning Team Nigeria athletes.
According  to  the  Director  Federation  of Elites athletes Department Dr  Simon  Ebhojiaye, the Ministry said it is abreast of the situation on ground and addressing them.
Payment of various allowances commenced since last week and its ongoing.
The Ministry is looking into some of the issues raised by the athletes and they are being addressed as quickly as possible.

The Honourable Minister on Thursday morning in a meeting spoke directly with the 10 track and Field athletes who will not be competing and assured them of their welfare.
He apologized to them over the unfortunate development  that led to their exclusion and promised  that it would be fully investigated.
In the same  vein, the Minister  intervened over the IOC packs for the athletes. Working with the NOC, the Minister and NOC President  on Friday morning were able to secure approval.
No official of Team Nigeria or NOC took away of the entitlements of any athlete was  being wrongly reported.
Therefore issue over the phone was resolved administratively according to the IOC Rule and guidelines.
Team Nigerian officials acted in line with IOC standards and as soon as approval was received the right thing was done.
IOC approved that the 10 Nigerian athletes receive Samsung Galaxy S21 5G
The letter of approval for there release was signed by Jonas Brun, Junior Project Manager, NOC Relations/ NOC Services.
“Regarding your athletes that will not participate in competitions in Tokyo in light of  the latest information received, I confirm that you can still go ahead and give phones to the athletes”,the letter reads.
The phones which were delivered to all NOCs at the Games Village was in order for them to benefit from all important information included in the Athlete365website and also to comply with requirements set forth in the Play books, in particular the download and use of the apps required by the Japanese authorities.