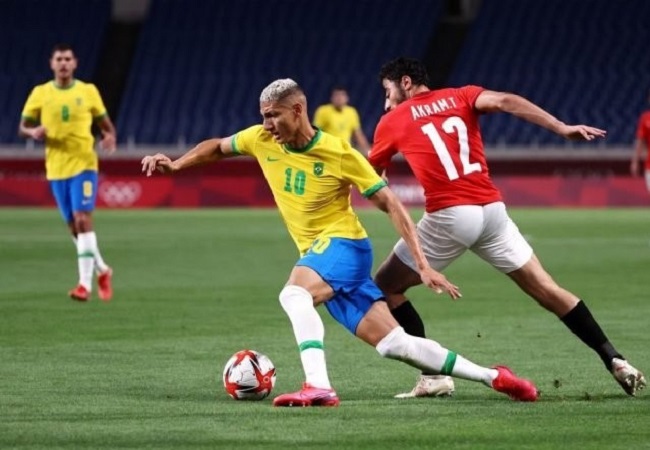 Brazil opened the scoring after a perfectly constructed counter attack. Richarlison received the ball on the left hand side and passed it to Cunha who was all alone on the edge of the penalty area and smashed in the back of the net.

The Seleção were awarded a free kick from a very dangerous position in the dying moments of the first-half. Butut Dougla Luiz was unable to test El-Shennawy.

Just two minutes into the second-half, Claudinho found himself in one on one situation with El-Shennawy. But the latter was able to clear it.

In the 58th minute, Douglas took a long range effort. But his shot grazed the left post.

Egypt coach Shawky Gharib then made two substitutions by putting on Salah Mohsen and Emam Ashour for Karim El-Eraky and Ahmed Yasser Rayan.

The Pharaohs could have levelled the score in the 64th minute when Ramadan Sobhi found Salah Mohsen inside the penalty area. But his header went over the crossbar.

In the 73rd minute, Reinier entered the penalty area from the left wing and attempted a shot but El-Shennawy was able to catch it easily.

Salah Mohsen took a long range effort in the 87th minute. But his shot was easily handled by Santos.