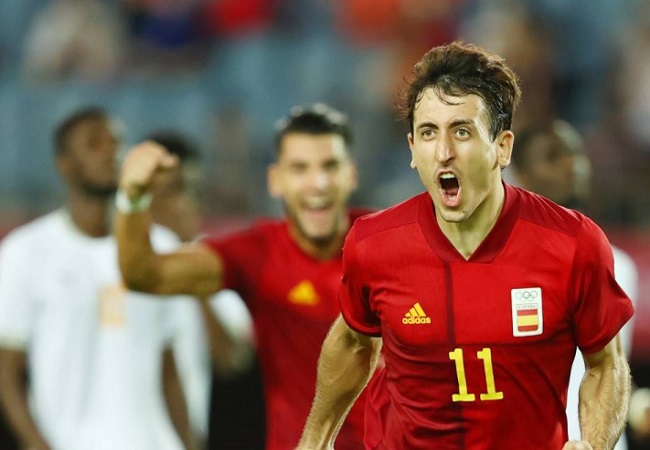 Manchester United defender Eric Bailly scored early goal to give Ivory Coast the lead over Spain in the Olympic men’s football quarter-finals. But the end of the game really disappointing. The elephants crashed to Spain 5-2 after extra-time.

Bailly was heavily involved as Spain, with a side containing a number of their stars from Euro 2020, somehow recovered from conceded an injury-time goal that would have taken the African nation through to the last four.

Spain proved just too powerful in extra-time, with Rafa Mir completing a hat-trick. He has thus kept their medal hopes alive, while the Reds pair will soon be returning to Carrington to prepare for the 2021/22 season.

Bailly opened the scoring in the 10th minute when forcing home a cross by Max Gradel to stun Spain. However, the response took only 20 minutes as Dani Olmo fired past Eliezer Ira in the Elephants’ goal.

VAR ruled out a Spain goal in the 42nd minute, as Mikel Oyarzabal was caught offside, and it remained 1-1. Amad’s introduction off the bench in the 63rd minute was designed to liven up the Ivory Coast attack, with their opponents dominating possession.

Gradel looked to have sent his nation through to the semi-finals when his effort took a slight deflection and beat Unai Simon in the 91st minute. But there was even later drama when substitute Rafa Mir forced extra-time by capitalising on some nervous defending to net with his first touch.

As the tension mounted, Bailly challenged Pau Torres for an aerial ball in the box. And he was penalised for handball after VAR studied the incident and Oyarzabal kept his composure to send Ira the wrong way from the spot in the 98th minute.

As Ivory Coast pushed to get back into the game, Rafa Mir scored twice more to produce a flattering scoreline, firing in from a tight angle off the far post, and then sealing his treble from Oyarzabal’s assist in the dying seconds.