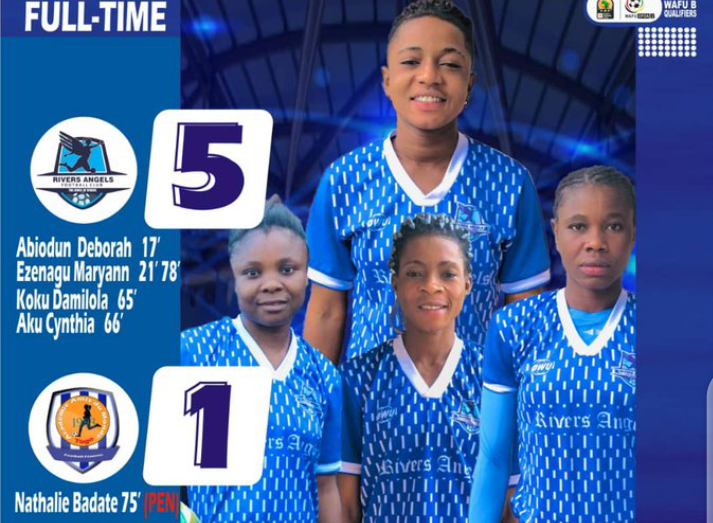 Rivers Angels are through to the final of the maiden edition of the CAF Women’s Champions League following a 5-1 victory against Amis du Monde on Monday.
The Jewel of Rivers arrived the Stade Robert Champroux on the back of their winning streak.
The Nigeria Women’s Football League NWFL Champions dominated the game in their usual fashion and just 14 minutes, Abiodun Deborah got them in front.
Maryann Ezenagu doubled the lead four minutes later as she headed  in the ball into the net after it slipped from  Amis goalkeeper hands.
Rivers Angels completely isolated their opponent as the first half ended 2-0.

It was Rivers Angels that got the second half underway looking to add more, but they had to wait until the 65th minute when Damilola Koku scrambled the third goal inside the net.
One minute later, Aku came off the bench and scored extended the lead to 4-0.
Nathalie Badate reduced rhe deficit as she scored in the 75th minute from the spot.
Amis du Monde could barely finished celebrating their goal when Ezenagu scored a superb freekick and wrapped up what was already a one sided game.
With the victory, Rivers Angels automatically qualifies to the maiden edition of the CAF Women’s Champions League this year and the final of the WAFU B Championship .