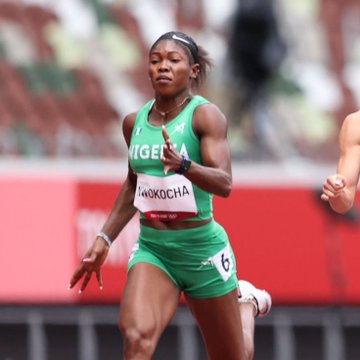 Grace Nwokocha advanced to the semi-finals of the women’s 200 meters at the ongoing Tokyo Olympics games.

Nwokocha ran a personal best of 22.47 seconds to finish third in heat 1 of the event to gain one of the automatic tickets to the semi-finals.

Cote d’Ivoire’s Marie-Josee Ta Lou had won the heat with 22.30, while the Bahamas’ Shaunae Miller-Uibo was second with 22.40.

It had only helped her to place fifth in semi-final 3, a result that was not enough for her to move to the final which was ran later in the day.

But this was after she had ran another personal best 11.00 to place third from heat 5 on Saturday in the event’s round one to progress to the semi-finals.

The women’s 200m semi-finals are due for later on Monday, while the final is slated for Tuesday.

In another development, there was two consecutive wins for Blessing Oborodudu who despite getting very tired in her quarterfinal bout against Meerim Zhumanazarova, held on for dear life to win by 3-2 and make the semifinal stage of the women’s 68kg.

For Oborodudu to be very certain of a medal, she has to win her semifinal fight against Mongolia’s Battsetseg Soronzonbold, and fight for GOLD medal.

If she loses, she will now have to fight for Bronze against one of the winners of the Repechage.