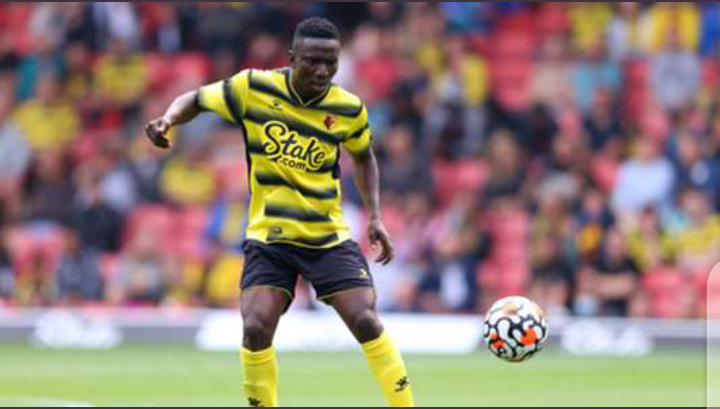 Oghenekaro Etebo was on target for Watford who defeated Doncaster 4-0 at St. Georges Park on Wednesday in a pre-season friendly.

First-half goals from Peter Etebo, Troy Deeney and Dan Gosling put the game to bed by the interval before Ashley Fletcher rounded off the victory in the second half from the penalty spot.

Watford started brightly and it took only five minutes for Etebo to put his side ahead, collecting the ball outside the penalty area and rifling a fierce shot into the top corner.

Doncaster struggled to deal with Watford’s attacking threats down both flanks and Ismaïla Sarr set up Deeney for a chance to double the lead inside ten minutes, but the captain failed to convert from close range.

Read Also: Onuachu Goal Not Enough To Save Genk As Aribo Balogun Misses In Rangers Loss

Deeney wouldn’t have been happy with his miss and made amends in the 15th minute, powering a downward header past the keeper after a floated Tom Cleverley cross.

Moments later it was almost 3-0, Gosling arriving late into the penalty area but curling his effort just wide from a Sarr cutback.

Just before the interval Gosling got his goal, finishing low after Cleverley fed Sarr down the right flank and the winger cut another pass back.

Watford made ten changes at the interval to give minutes to as many outfield players as possible, with only Foster retaining his place between the sticks.

Emmanuel Dennis was withdrawn as a precaution following an injury shortly after, and the winger was replaced by a trialist on the left flank, with Baah moving to the right.