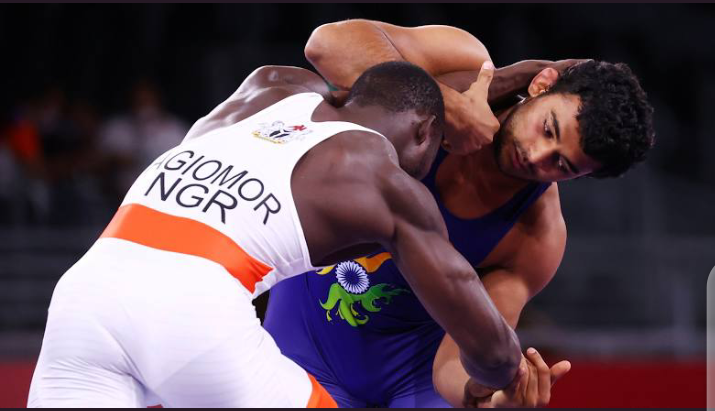 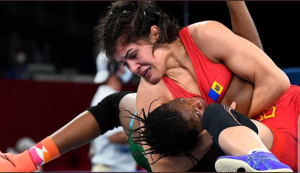 Odunayo pinned down by Anastasia of Moldova in the female wrestling

It was not a good day in the office for team Nigeria at the ongoing Tokyo Olympic Games on Day 13.
Having won two medals on Day 12, the momentum was high and there were hope for many more to come.
Team Nigeria participated in three sports in Day 13 and failed to progress to the medal stages.
In wrestling, it was a surprise for Nigeria’s wrestlers, Odunayo Adekuoroye and Ekerekeme Agiomor who both lost.
Agiomor who was Nigeria’s only male wrestler to the Tokyo Olympic games, in his first bout lost to Deepak Punia of India by 1-12.

The shock of the day was when Odunayo who was leading 8-2 in the female wrestling event in a twist of fate lost by fall to Anastasia Nichita of Moldova.
Odunayo’s hope of vying for a bronze medal now depends on Anastasia to reach the finals.
Nigeria’s first ever female canoeist to the Olympic Games, Ayomide Bello also failed to progress to the semis in Canoe sprints.
Bello finished with a faster time of 47.326s in the quarter final could not make it to the semis after she finished third place in the women’s singles 200m.
Nigeria have so far gotten one bronze and a silver in the ongoing Tokyo 2020 Olympic Games.