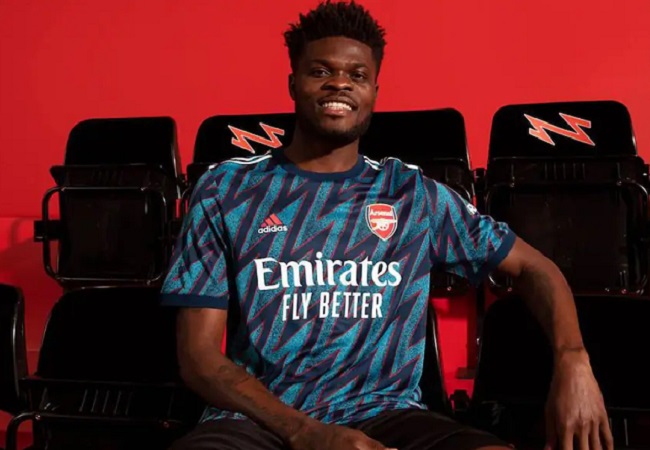 Arsenal ace, Thomas Partey, has modeled in the club’s new third kit for the upcoming season. The 28-year-old was glittering in the new jersey, as the Gunners unveiled the Blue kit for the 2021/22 season.

In photos posted on the club’s website, deputy Black Stars captain was part of the few players who took shots with the new jersey.Every club in England uses three set of jerseys for a season, the home, away and third kit.

Arsenal will use their regular Red and White jersey for home games and a light green away kit.

The Blue jersey with a scarlet outline will be used as the third jersey. “Our striking new kit takes inspiration from 90s style and culture and has a bold lightning pattern running throughout.” Wrote Arsenal.

“The shirt is a combination of different tones of blue with a scarlet outline and will be accompanied with dark blue shorts and socks. A women’s shirt, in both authentic and replica versions, and youth kits are also available.

“The new kit will be worn on pitch for the first time in our Premier League curtain raiser against Brentford on Friday.“ Continued the statement.

Thomas Partey is currently nursing an injury that will keep him out for the next three weeks. The Ghana international will miss the matches against Brentford, Chelsea and Manchester City.