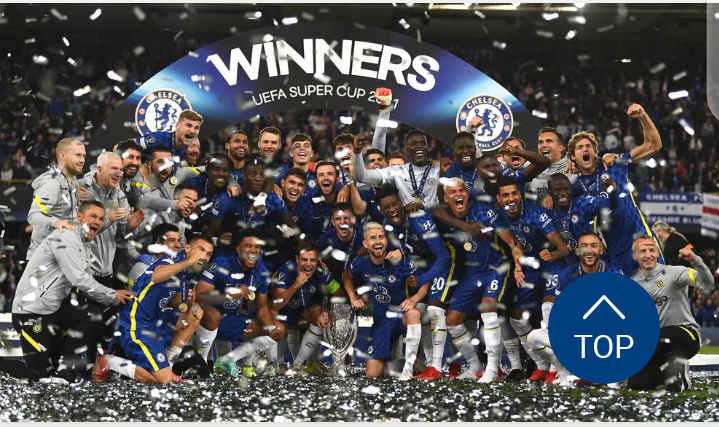 Chelsea defeated Vilarreal 6-5 in penalty shootout to lift the UEFA Super Cup for the second time  in Belfast after the game ended 1-1 in regular time.
Hakim Ziyech gave Chelsea the lead in the 27th minute but the Moroccan could not complete the game as he picked up an injury.
Villarreal were unlucky to levelled as the game ended 1-0 heading to the first half break.
The Yellow Submarines came out in the second half more determined and the brilliance of Edouard Mendy saw Chelsea maintained their lead.

However, Gerard Moreno equalized for the Europa League champions in the  73rd minute.
Both side failed to score both in extra as the game went on to penalty shootout.
Kai Havertz missed Chelsea first kick before Arrizabalaga saved Aissa Mandi spot kick.
The Spaniard guessed well and saved Raul Albiol penalty to give Chelsea it’s second UEFA Super Cup.
The first time they won the Super Cup was in 1998 and it was also against Real Madrid of Spain.
The victory saw Thomas Tuchel maintained his record against a Spanish club.
He has never lost against Spanish opposition in his managerial career, winning four and drawing five of his nine such games.
According to Opta, this is the third year in a row, the UEFA Super Cup has been won by a team managed by a German coach; Jürgen Klopp with Liverpool in 2019, Hansi Flick with FC Bayern in 2020 and Thomas Tuchel with Chelsea in 2021.