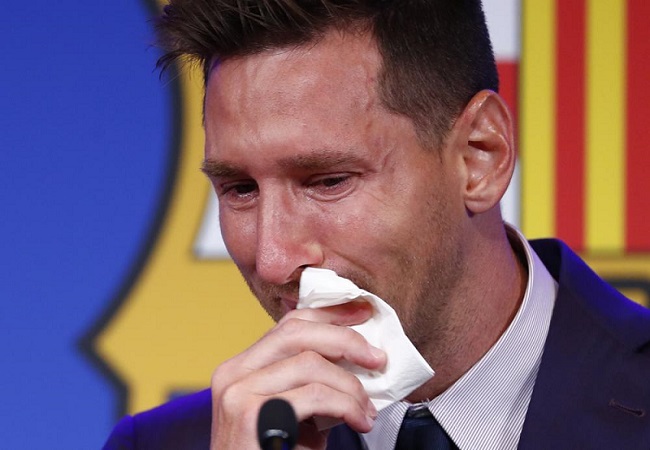 Lionel Messi has left Barcelona after the Spanish football heavyweights were unable to fulfill a new contract due to financial and structural obstacles. And legendary Egyptian coach Mohsen Saleh has criticized Leo Messi for his ‘crocodile tears’ at his last FC Barcelona press conference over the weekend.

The Argentine football icon was very emotional during the event where he also confirmed that a move to French giants Paris Saint-Germain is a possibility.

Saleh, who has coached Egypt and Libyan national teams, stated that Messi could have continued by forfeiting part of his wages to help financially-crippled Barcelona.

“Crocodile tears are when a hypocrite cries despite not feeling any kind of sadness. He in fact feels the opposite way.” Saleh wrote on Twitter.

“Messi, why are you crying when you could have stayed by sacrificing a part of your salary due to the club’s current financial state?

“You’re greedy. And you’re not the only one. You claim you left because of the rules while others claim they left for ambition.”

Considered by some as the greatest footballer of all-time, Messi started his professional career at Barcelona in 2003. And he went on to win 34 major titles with the club.

Messi assumed captaincy of Barcelona in 2018. And in 2019, he has won a record sixth Ballon d’Or.