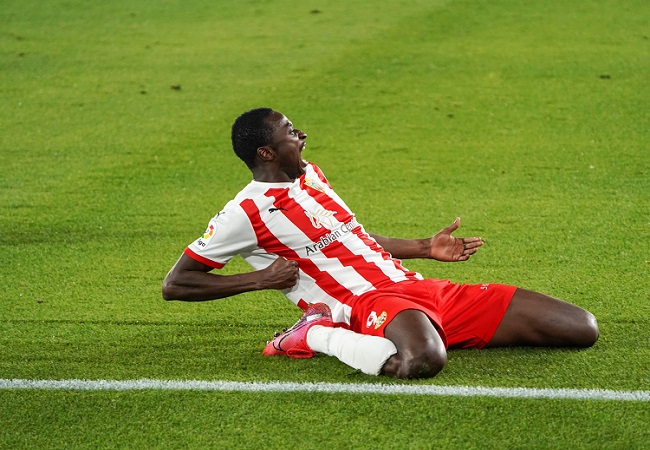 Sadiq Umar scored the first goal for Almeria as they secured a 3-1 victory against Cartagena in their season opener away at the Estadio Municipal Cartagonova.

After scoring 20 goals in the Spanish second division last season, Umar continued from where he left off by opening Almeria’s account in the 2021/22 league campaign.

The former Roma man opened the scoring in the 19th minute as he received a pass from Jose Lazo. And the Nigerian striker struck a shot that beat Marc Martinez in goal for the home side.

Almeria looked in complete control of the game after the goal. Their masterful gameplay paid off again in the 35th minute as Largie Ramazani pounced on a loose ball and fired home to increase the Rojiblancos’ lead to a 2-goal margin.

While the first half possession was shared evenly between the two sides, Almeria were the more deadly side as they were able to get six shots on target in the first half. Their directness helped them see out the first half with a 2-0 scoreline.

It took just four minutes of play in the second half for Cartagena to reduce the deficit by a goal. Halftime substitute Alex Gallar set up Antonio Luna, who made it 2-1.

However, it didn’t take long for the away side to once again exert their dominance on the game as Ramazani scored his second and Almeria’s third.

The Rojiblancos then locked things up after the goal. All advances were in vain as Almeria emerged as winners of the fixture.

The win takes Almeria to the summit of the league. They face Real Oviedo next on Friday.