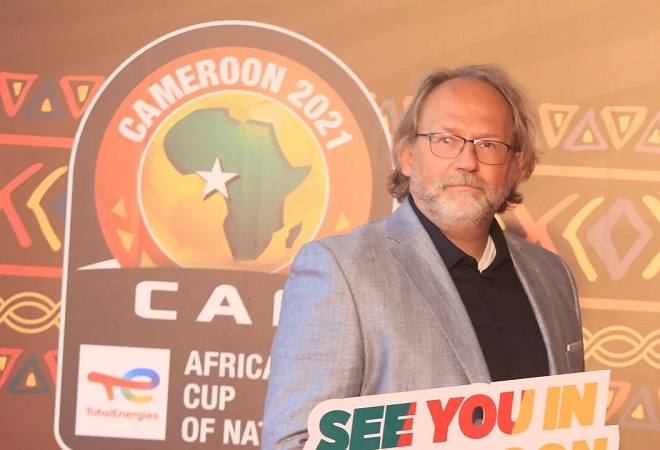 Gambia will make their first ever appearance at the prestigious African tournament, Cameroon 2022. The Scorpions paired in Group F with former champions Tunisia and CAF Zone West A rivals Mali and Mauritania following draw that took place in Yaounde on Tuesday 17 August 2021. And Gambia coach Tom Saintfiet believes Gambia will be competitive at the TotalEnergies Africa Cup of Nations next year.

“I think we can be satisfied with this draw. And for sure, we can be competitive in this group.” The Belgian coach told CAFOnline.com. Saintfiet’s team will be based in the city of Limbe alongside their group opponents. The former Togo and Namibia coach said the draw merged his pre-draw expectations.

“Before the draw, I had some dream draws. And I think draw has come close to it.

“We cannot underestimate any team. Because in the AFCON, every country is a good strong country.

“Every team that qualified has quality but playing Tunisia is not bad – also Mauritania and Mali neighboring countries in West Africa.” Added Saintfiet.

Gambia made history in March this year when they booked their place at the continent’s flagship tournament. They surprised their higher ranked opponents Gabon, DR Congo and Angola to top the group with 10 points. “It was an exciting draw. And I was so happy to see my country drawn in the TotalEnergies Africa Cup of Nations for the first time.” Said Scorpions forward Assan Ceesay.

“It’s a fair draw but we need to prepare very well. Because it will not be easy. We’re all looking forward to the tournament.”

The Scorpions as the Gambian team is nicknamed will open their account on Wednesday, 12 January 2022 at the Limbe Omnisport Stadium before taking on Mali and Tunisia respectively.