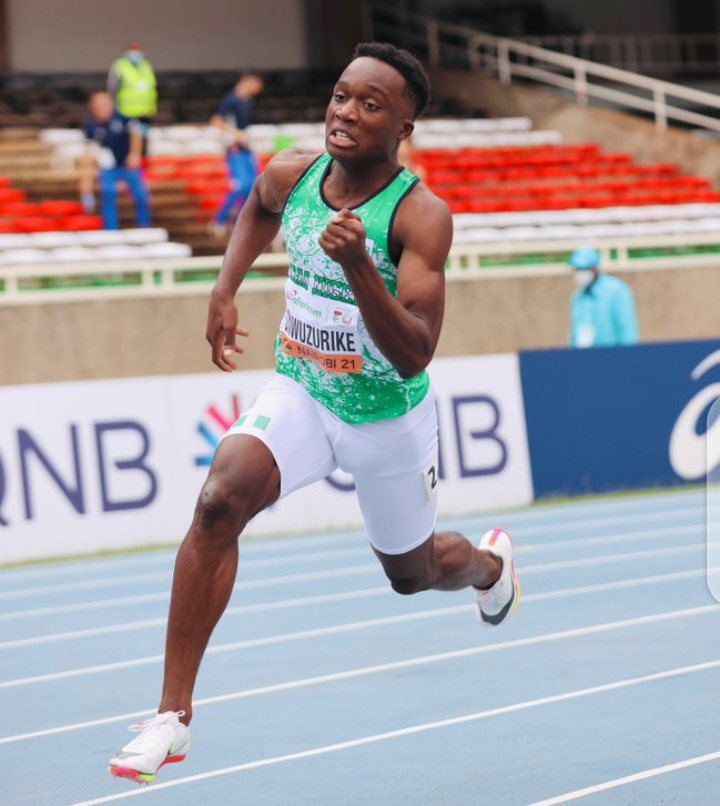 It was good start for team Nigeria on Day 3 of the ongoing World U20 Athletics Championship in Nairobi, Kenya.

After failing to win any medal in two events on Thursday, team Nigeria continued their push for more medals to add to their 4×400 mixed relay gold they won in the opening day.
Prosper Oghenemine Ekporere ran a personal best of 13.71s to win the heat 1 of men’s 110m Hurdles.
Ekporere improved on his previous Personal Best of 13.97s, clocking a new one of 13.71s (+0.2) to progress to the semifinal stage of men’s 110m Hurdles.

Also, in heat 3 of women’s 200m, Nigeria’s Anita Taviore also qualified for the semis, clocking 23.97s to finish 3rd in the race.
Star girl,  Favour Ofili ran the second fastest time overall, winning the last heat of women’s 200m in a time of 22.74s.
Ofili was quite dominant in the race, beating her closest challenger Lucia Carrillo (23.62s) by almost a second.
Anita Taviore also qualified for the semis, clocking 23.97s to finish 3rd in heat 3.
Nicholas Fakorede was a little behind with about 80m to go in heat 4, but he finished strongly, crossing the line in 21.14s to finish 5th and within a chance of progressing to the semis.
He is currently 3rd in the next four fastest times, and will hopefully go through.
United States born Nigeria athlete Udodi Onwuzurike  marked his first outing for Nigeria with a new Personal Best, coming out of the bend before South Africa’s  Sinesipho Dambile to win heat 1 of men’s 200m clocking  20.47s.
In the Long Jump, Ruth Agadama qualified for the final on Sunday, as she jumped a mark of 6.06m.
Agadama hit the 6m mark on her last attempt which got her the passage.
It was not the expected outing for Esther Osisike who finished 11th with a 1st round attempt of 44.68m in the discus.
Osisike was fouled in her second attempt before she threw 44.17m on her third attempt.
However, it was not enough to get her to the final.