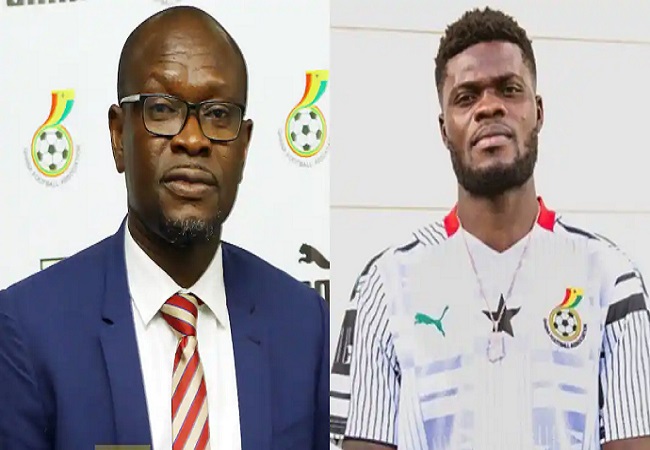 Ghana midfielder Thomas Partey got injured playing for Arsenal in a pre-season fixture with Chelsea. It was after a coming together with Morocco’s Hakim Ziyech. And Black Stars coach Charles Koblah Akonnor is doubtful about deputy captain Partey’s involvement in the upcoming 2022 Fifa World Cup qualifiers.

Despite the injury, Partey was included in coach CK Akonnor’s 30-man squad for the upcoming World Cup qualifiers with Ethiopia and South Africa.

According to reports, Akonnor speaking with the media in a press conference in Accra on Friday, August 20 said he has been in communication with the midfielder.

“With Partey, yes, we’ve been talking. It doesn’t look too good.”

However, the Black Stars coach explained that Partey’s absence will not affect the team much as there are other players who could fill his role.

“Still, there’s always Plan B. We have people who will take that position and do well. So we’ll wish him speedy recovery, get well soon. But it doesn’t look too good.”

Partey missed Arsenal’s opening Premier League game with Brentford. And he is set to miss their game with Chelsea too. However, the club announced via their website that Partey should be back in training at the end of August.

“Right ankle. Thomas sustained an injury to ligaments in his right ankle during the friendly match against Chelsea on August 1. Thomas continues to be assessed and is expected to be back in training by the end of August.”

Ghana will be hoping to start their World Cup qualifiers on a winning note. And they should return to compete on the World stage after missing out on the 2018 edition in Russia.

It was earlier reported that Ghana deputy captain and Arsenal midfielder, Thomas Partey, will miss the first three weeks of the season due to an injury he sustained during the pre-season friendly against Chelsea.

The 28-year-old is expected to miss the games against Brentford and Chelsea, when the Premier League begins this weekend. Arsenal FC confirmed the Ghana international will be out for three weeks.