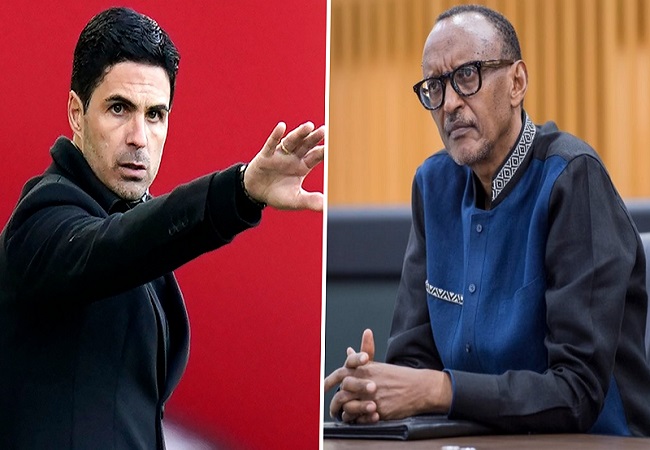 Further to Arsenal’s poor performance 0-2 against Brentford on Friday, 13th, Paul Kagame scathingly reacted. And the manager of the Gunners, Mikel Arteta admits he has 99 problems at the club right now. But the President of Rwanda is not one.

Read Moer : RWANDA PRESIDENT HAS EXPRESSED HIS UNHAPPINESS AS ARSENAL LOST TO BRENTFORD

Positive tests forced them to miss the curtain-raiser at Brentford, which ended 2-0 to the newly-promoted hosts. And Arteta spoke darkly of those who wanted to “bury” him and his team. But he appeared surprised when the name Paul Kagame came up. The Rwandan government sponsors the Gunners, who wear ‘Visit Rwanda’ on their sleeves and the African nation’s president, a fan, had been critical of the display against Brentford.

“Arsenal should not accept mediocrity.” Said Arteta on being hastily informed of Mr Kagame’s post-match Twitter rant. “I totally agree with that.”

Arteta’s critics might have softened their stance had the club made it clear straight away just how much Covid had affected preparations. The Spaniard said he was surprised the match had not been postponed. But it was not until Thursday that the reasons behind fielding an inexperienced line-up were made public.

“For me it was simple. My best players had Covid, they cannot play. I had to put a team out there that is unprecedented in this league and take all the pressure off. The club will be always in front of me. I will do that again next time.”

Arteta opined that he had “no clue” as to the origins of the Covid outbreak amid suggestions that a party for one of Aubameyang’s children could have been the source. Worryingly, it was confirmed that not all of his players had agreed to be vaccinated.

“Most of them are double vaccinated. Others have one. We are trying to encourage them to get vaccinated to protect themselves and their families and the environment around the club.” Said Arteta, who was one of the very first in football to be hit by the virus in March last year.

“We are trying to guide them and explain why it’s better to do it. But at the end it’s a personal position.”

Another rod for their inexperienced manager’s back is the fact that Arsenal have now spent more on new players than anyone else in the Premier League this summer.

Chelsea, with the Lukaku signing, still appear to be streets ahead of their London rivals however.

“We have done what we had to do.” Said Arteta testily on being asked which club had enjoyed the better window. “I don’t know they wanted to do. So it is difficult to compare.

“There were a lot of sales as well. It’s not just about the spending. We have a lot of players out of the door.”

Arsenal host Chelsea this Sunday at 15:30 and they are expected to come back to better performance.