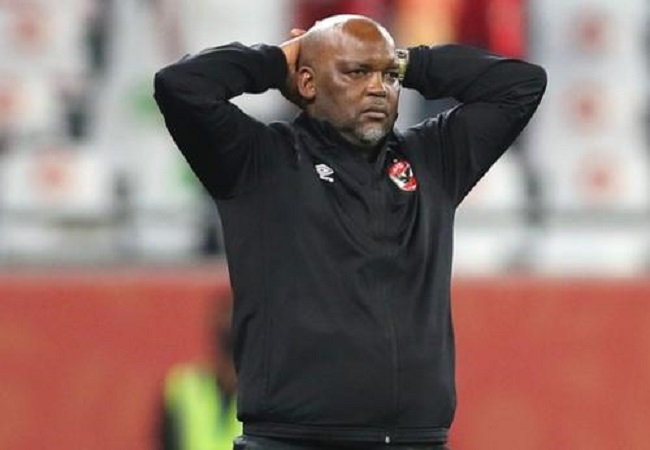 Al Ahly met El Gouna on Tuesday evening in Egyptian Premier League crucial game for the Red Devils to defend the title. But unfortunately, Pitso Mosimane’s  Al Ahly failed to secure all three points as they shared the spoils with the opponents. The Egyptian champions had no option than to surrender their title.

Al Ahly travelled to the El Gouna Stadium knowing that only three points would do if they were going to stay in the hunt to defend their title. But a 3-3 draw spelt the end for Mosimane’s side.

Zamalek, Al Ahly’s rivals on their pursuit to reclaim the title, still had a part to play of course. And the White Knights had to get the required result to take full advantage of the situation. They did so eventually, impressively helping their own cause with a 2-0 victory over El-Entag El-Harby. A result that would’ve no doubt left Mosimane in dismay.

It was thought that Mosimane’s side would be aided by a favourable run in, while Zamalek’s run to the finish line had looked to have the most potential obstacles. But Al Ahly in turn failed to take advantage. And they failed to take the league race to the wire.

The White Knights were seemingly in no mood to pass up on any good fortune. And they made sure they saved themselves and their fans from any potential anxiety that would’ve been caused by drawing out the race for the title.

Al Ahly had their backs against the wall early on against their hosts El Gouna who surprisingly took the lead in the seventh minute through Mohamed Naguib. Mosimane must have said something to his charges from the sidelines as they soon took that goal as a wake up call. They would have to wait till the second to claim their equaliser however. And it came through a spot kick converted by Tunisian defender Ali Maaloul.

Just under 10 minutes after that, Al Ahly found themselves in front for the first time with a Hussein El Shahat strike gave Mosimane’s side a 1-2 lead. Then with just eight minutes left on the clock, star player Mohamed Sherif had looked to put the result beyond reasonable doubt when he netted the third for the Red Devils. Mosimane must’ve been celebrating a job completed at that point.

But what would ensue next would be a stunning collapse for Ah Ahly with the hosts firing in two quick strikes in four minutes to earn a hard fought 3-3 home draw. A result that effectively ended any hope of Mosimane winning the Egyptian League in his first full season at the African giants.